While I’m not Jewish, I wish a happy Hanukkah to any of my readers who are. This week’s “best of minorities in cartoons” entry sums up Jewish characters I’ve written about, and instances where Hanukkah’s mentioned or celebrated.

The Ardin family. The stars of the comic strip “Edge City,” the Ardins often get storylines that center around the Jewish holidays.

Plenty of DC Comics characters are Jewish. Some include:

Batwoman. Since her reintroduction a few years ago, Kate Kane has been revealed to be Jewish. DC’s “52” storyline (according to Wikipedia) shows that Kate celebrates Hanukkah.

Morgan Edge. The pre-Crisis/Earth-1 Morgan Edge was revealed to be Jewish in “Action Comics” #468 (February 1977). Edge’s original name, before he changed it, was “Morris Edelstein.” However, there’s no indication so far if his New 52 counterpart is also Jewish.

Superman stories have had other Jewish characters appear. For instance, during the Bronze Age, Clark Kent sometimes conversed with an elderly Jewish neighbor of his, Mrs. Goldstein. Finally, of course, Superman’s creators themselves were Jewish, along with some of the other people who’ve worked on Superman over the years, including long-time Superman editors Mort Weisinger and Julius Schwartz.

Andrea (“Krypto the Superdog”). Only one episode of this short-lived series centered around Andrea‘s religion, the Hanukkah themed “Iguanukkah.” Besides revealing Andrea’s Jewish, we also learn that LexCorp closes for at least the first night of Hanukkah. Despite his evil, Luthor apparently doesn’t mind employees knocking off early for holidays!

Seraph. Seraph is a Jewish superhero who lives in Israel, and is a member of the superhero team the Global Guardians.

Colossal Boy. Gim‘s Jewish; he was seen celebrating Hanukkah in one story.

There’s also plenty of Marvel characters who’re Jewish. Some include:

Wiccan. Wiccan of “Young Avengers” is Jewish. He’s seen celebrating Hanukkah alongside some of Marvel’s other Jewish superheroes in 2011’s “Marvel Holiday Special.”

White Tiger (Kasper Cole). One of the people to assume the superheroic identity of the “White Tiger” was Kasper Cole, a man of Jewish/African-American heritage.

The Thing. Ben Grimm was confirmed in 2000s comics as being Jewish.

Iceman. Bobby‘s mother was Jewish, though his father was Catholic.

Sasquatch. Walter appeared at a Hanukkah party for Jewish superheroes (along with Wiccan, the Thing, and Kitty Pryde) in 2011’s “Marvel Holiday Special.”

Kim Rosenthal. I assume Kim celebrated Hanukkah as a girl with her adoptive parents. Her adult self doesn’t seem particularly religious, however.

Mark Slackmeyer (“Doonesbury”). Mark is Jewish, though it infrequently comes up in storylines. His being gay, however, gets much more mention in the strip. 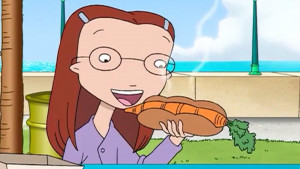 Tish. An episode of “The Weekenders” (“The Worst Holiday Ever”) focuses on the gang all celebrating different holidays, but united by…all of them being annoyed. Specifically, Tish celebrates Hanukkah, Lor celebrates Christmas, Carver celebrates Kwanzaa, and Tino celebrates the winter solstice.

Ron Stoppable. The sidekick of Kim, Ron had an episode about his bar mitzvah, though I can’t recall any episodes about Hanukkah. Ron does like to watch what looks like a generic/non-denominational holiday special, starring a pastiche of Sam the Snowman from “Rudolph the Red-Nosed Reindeer.”

Nathan. Nathan‘s Jewish, which comes up in a few strips. 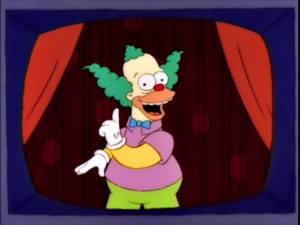 Krusty the Clown’s religious background has been the basis of a few episodes, including the one where Krusty reunites with his father (a rabbi).

Arthur‘s stated in the 90s animated series as being Jewish.