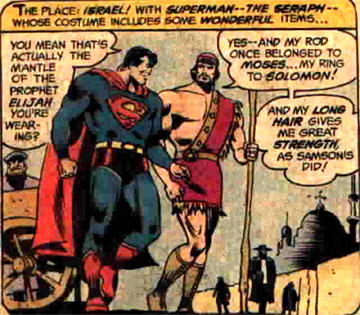 Seraph was created for the “Super Friends” tie-in comic in the late 70s as part of an effort to add some diversity, by showing superheroes through the rest of the world, not just America. Given the comic was written by DC’s usual staff, it lacked the flaws of the TV show (violence restrictions, forgetting whether the Flash could fly or not, etc.). Thus, it ended up being a lighter version of their “Justice League of America” comic.

Seraph’s backstory states he’s a Jewish schoolteacher who lives in Israel, and was somehow divinely gifted with several sources of power:

Chaim would also show some religious beliefs, occasionally praying to a “higher power” for assistance.

Seraph appeared in his own series of backup stories in the “Super Friends” title, but never in the TV show itself (or any other non-comics media).

Seraph eventually appeared in the DCU proper, in “DC Comics Presents” #46 (June 1982). There, he joined the Global Guardians, a superhero team made up of heroes from all over Earth. Seraph also appeared post-Crisis, where he formed a new version of the Global Guardians after the original suffered casualties.