Home › Diverse Media Notes › “The Daily” folds… why did it fail? 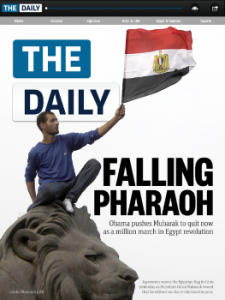 News came around the online world that Rupert Murdoch’s iPad-based daily newspaper, “The Daily,” is closing up shop, not having pulled in as many subscribers as they’d wanted. See NPR’s article on the rise and fall of the digital-paper-that-couldn’t.

As for why it couldn’t, every media outlet online’s speculating why. Overall, I’d agree with Mashable and a few other sites’ take on why “The Daily” failed (besides a generic sounding name… I keep wanting to add “Planet” at the end…):

From the NPR and Mashable articles, it sounds like they’re folding the remaining “Daily” staff and resources into the “New York Post,” which is a well-known paper that already has an online presence, one not tied to a specific $500 tablet. Improving the “Post”‘s online (and mobile device) presence might’ve been a better path to take instead of starting up “The Daily” in the first place.