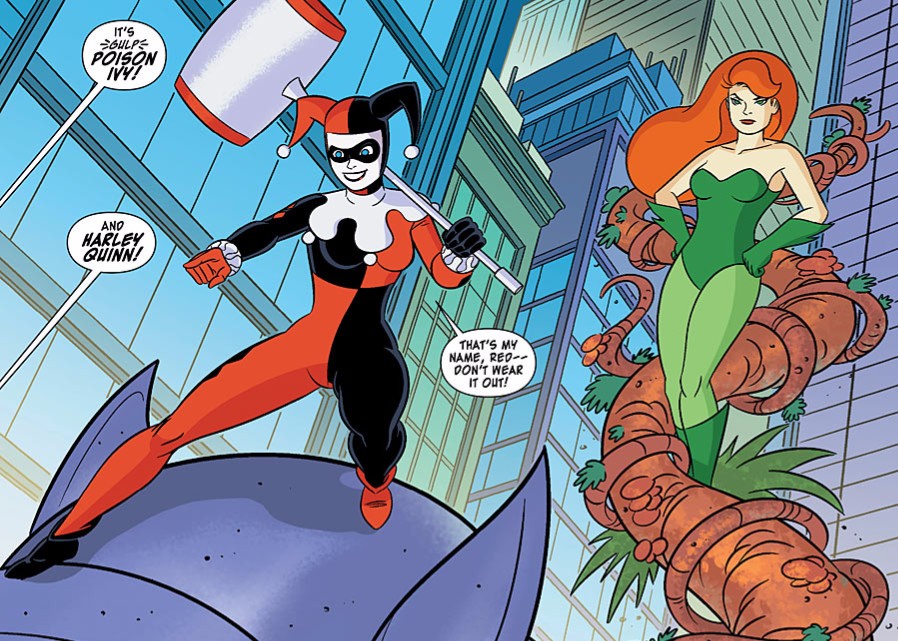 As her backstory states, Harleen was originally a psychiatrist working at Gotham City’s Arkham Asylum. There, she ended up falling in love with her main patient, the Joker. Harleen decided to throw away her career (and what sanity she had) and join the Joker as his sidekick. Donning a harlequin costume, Harleen became known as “Harley Quinn.”

Harley also became friends with, and an occasional partner of, fellow villain Poison Ivy. Despite Harley’s affection toward “Mistah J” (as Harley called Joker in her thick New Yorker accent), Joker showed no affection in return.

Harley Quinn quickly became one of the most popular characters on “Batman: The Animated Series.” She was quickly introduced into the TV show’s spinoff comic, and also the regular DC Universe. In the DCU, Harley kept most of her backstory and friendship with Poison Ivy. However, all of it was modified to better fit into mainstream DC Comics (i.e., made darker and more violent).

As time wore on, Harley lost her in-story connections to the Joker; just as well, given his mistreatment of her. She’d also become popular enough to get her own self-titled comic.

Recent versions have made Harley into more of an anti-hero than a villain. Nowadays, Harley’s treated as basically DC’s answer to Marvel’s Deadpool. She’s also (at this writing) one of DC’s top-selling female characters.

Like most Batman villains, Harley has no powers. She makes use of athletic skills, as well as various harlequin/clown-themed weapons. Her trademark weapon’s a giant carnival mallet, used as a club.

Recent comics have declared, after years of heavy hinting, that Harley’s in a non-monogamous relationship with Poison Ivy. (If curious, Poison Ivy made Harley immune to poisons.)

On the kid-friendly side of things, Harley’s one of the characters in DC’s “DC Super Hero Girls” line. There, she’s Wonder Woman’s roommate.

Harley and Ivy also appeared in an issue of “Scooby-Doo Team-Up.”

Harley’s also been retroactively introduced to the world of the Adam West “Batman” TV series, via the “Batman ’66” comic.

On the adult-oriented side of things, Harley appeared in 2016’s “Suicide Squad” movie. DC’s 2011 New 52 reboot also ditched her traditional costume in favor of an “updated” look. (For the record, I like her older costume much better.)

Arleen Sorkin voiced most of Harley’s 90s and 2000s media appearances. Sorkin is an actress who’s also appeared on the soap opera “Days of Our Lives.”