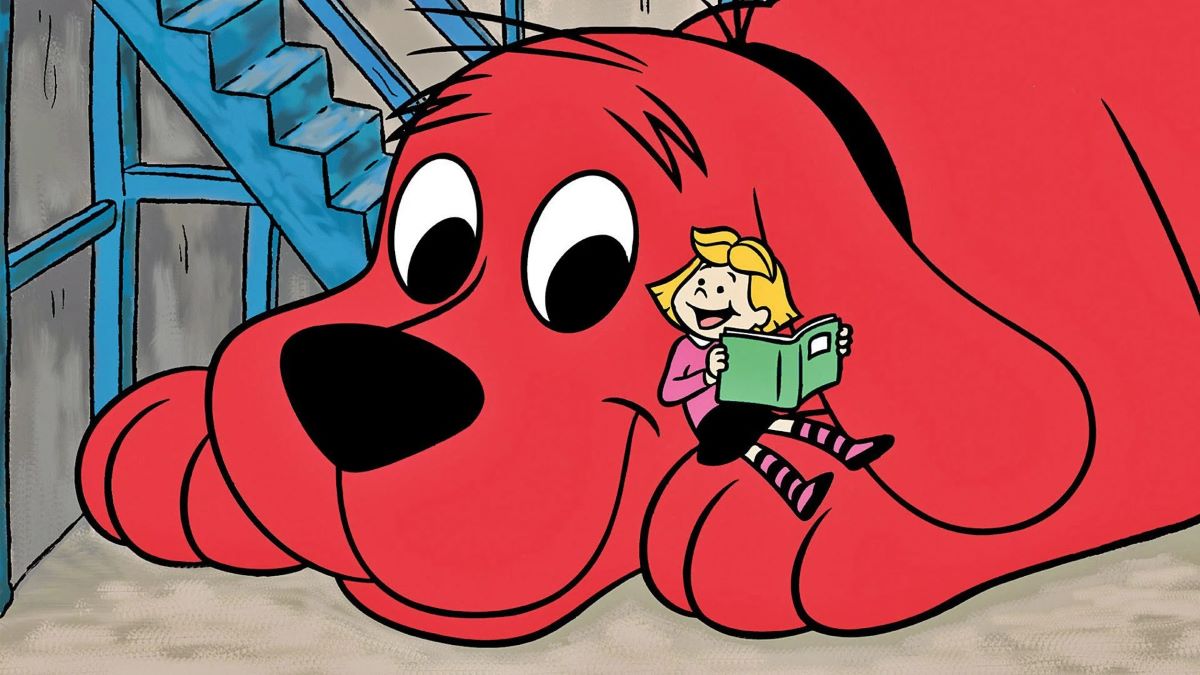 The series stars Clifford, the aforementioned “big red dog.” Of course, Clifford’s easily the biggest dog in fiction (sorry, Lockjaw)—while he doesn’t have a set size, he’s at least the size of a two or three story house. Clifford’s backstory states he was (ironically) the runt of his litter, but thanks to the ample love of his owner, grade-schooler Emily Elizabeth, he grew… and grew…and grew.

The books and cartoons state Clifford grew so large, they ended up moving from their initial home in a city apartment to the countryside (the New England-esque “Birdwell Island” in the animated series).

Most of the books focus on one simple subject—Emily Elizabeth going to school, Clifford becoming a Hollywood star, or Clifford having a reunion with his (normal sized) canine family.

In 2000, PBS debuted an animated spin-off of “Clifford,” featuring John Ritter (in one of his final roles) as the big red dog’s voice. Along with Clifford, the show also featured two (normal-sized) dog pals of his: Cleo, a poodle (voiced by Cree Summer), and T-Bone, a bulldog (voiced by Kel Mitchell, of Nickelodeon’s “Kevin and Kel” fame).

“Clifford” had 65 episodes made, as well as a spin-off theatrical film.

After John Ritter’s death, “Clifford” ended its run, but was soon followed by a spin-off prequel series, “Clifford’s Puppy Days.” Based on the series of “Clifford, the Little Red Puppy” books (about Clifford’s puppyhood), the prequel focused on Clifford and the Howards’ life in the city. Puppy-Clifford’s voice was done by Lara Jill Miller. A new group of animal friends were created for the series, including a second pet for the Howards, Daffodil (a rabbit).

Emily Elizabeth’s human friends in this series include:

39 episodes of “Puppy Days” were produced for PBS.

A new “Clifford” animated series debuted on PBS and Amazon Prime Video in 2019. The new series is basically a reboot; while still set on Birdwell Island, there’s an entirely new cast of characters unrelated to the 2000s series. Oddly, Emily Elizabeth and Clifford can talk to each other here, though she’s the only one who can converse with the big red dog.

Clifford’s also been remodeled to resemble the books’ version a bit more; there’s also more song numbers. The latter might be a result of the show being made by the same staff as PBS’ “Peg + Cat.” Like the original series, the show still covers “slice of life” lessons, plus an emphasis on reading.

Some of the supporting human characters of note for this series include:

Here’s the opening credits for the 2000s “Clifford the Big Red Dog” PBS series. (Which YouTube doesn’t allow me to embed, for some reason.)

And here’s the opening credits for the 2019 series.