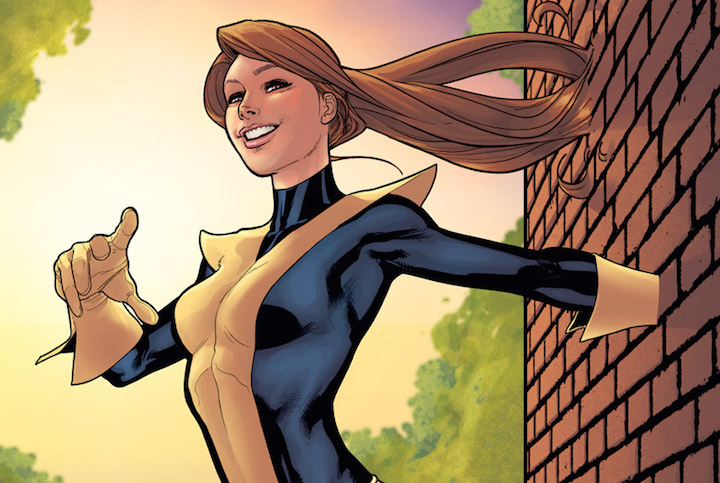 This week’s minorities in cartoons entry is Kitty Pryde (full name: Katherine Anne Pryde), a member of the X-Men.

Kitty grew up in Illinois as a particularly gifted youth. When her powers began to emerge during adolescence, Xavier initially tried to recruited her. However, Emma Frost also attempted to recruit her for the secretive and nefarious Hellfire Club’s own ends. Following a sudden attack by/battle with the Club’s minions, Kitty contacted the X-Men for help. Afterwards, she decided to enroll in Xavier’s school. This made Kitty the youngest X-Men member to date.

Kitty became a long-standing X-Men member, and made close friendships with several members, most prominently Storm and Wolverine. Initially going by the codename Sprite (a name suggested by Storm), she eventually changed it briefly to Ariel (a name suggested by Prof. Xavier). After an adventure with Wolverine in Japan (where Kitty underwent some martial arts training), she changed her codename to the longest-lasting and current one, Shadowcat.

The classic storyline “X-Men: Days of Future Past” saw Kitty prominently featured. Kitty’s adult self from an alternate future occupies her present-day self’s body via mental time-travel means. This was an effort to warn the present-day X-Men and avert that horrific future.

Besides the X-Men, Kitty also spent time with a few other teams. These have included X-Men offshoot the New Mutants, British-based team Excalibur, and SHIELD.

After a mission in outer space, Kitty befriended Lockheed, a sentient dragon-like alien. He’s since become an extremely loyal and constant companion to Kitty, and shares a psychic bond with her.

Kitty’s trademark mutant power is the ability to phase through any object like a ghost. Said ability can also be used to disrupt electronics.

She’s also skilled in other areas, including dancing, computer programming, and linguistics. As a youth, Kitty’s shown taking ballet lessons.

Kitty is Jewish, which has come up in a few storylines. A 2011 story showed Kitty attending a Hanukkah celebration among Marvel’s Jewish superhero community. Other attendees included the Thing and Wiccan.

Kitty’s appeared in most X-Men spinoff media to date.

Of note is that a time-travelling Wolverine replaced Kitty’s role in the movie version of “Days of Future Past.” This was met with some criticism by fans, especially those looking for more prominent representation of women in superhero films.