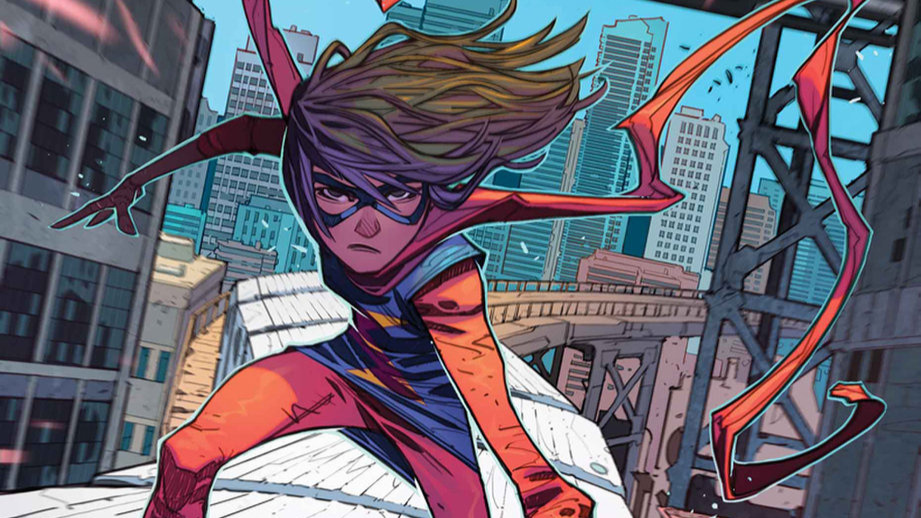 I thought I’d take a look at five characters of South Asian descent in cartoons. According to Wikipedia, the term “South Asia” refers to the region of Asia containing Afghanistan, Bangladesh, Bhutan, Maldives, Nepal, India, Pakistan, and Sri Lanka.

Since her debut in 2013, Kamala has become one of Marvel’s most popular teenage superheroes. She’s also easily the most popular Marvel character that’s an Inhuman, and superhero comics’ most prominent Muslim character. Kamala first appeared in “Captain Marvel” #14 (September 2013). She was created by editors Sana Amanat, and Stephen Wacker, writer G. Willow Wilson, and artists Adrian Alphona and Jamie McKelvie.

Kamala’s backstory states she’s the daughter of Pakistani immigrants who moved to Jersey City, New Jersey. Kamala grew up respectful of her background, but also wanted to fit in with her peers. She’s also a huge fan of Carol Danvers, the former Ms. Marvel (now Captain Marvel), and has an interest in some geeky things. Her catchphrase is “embiggen!,” taken from “The Simpsons.”

One night, Kamala was exposed to the Terrigan Mists (a special mutagenic gas of Inhumans lore), which gave her her powers: the ability to shape-shift, shrink/grow, and extend various body parts. Kamala used her powers to become a superhero, and defend Jersey City from various threats.

Kamala eventually appeared in non-comics media, including video games and animation. Most prominently, Kamala got her own TV series on Disney+ in 2022, “Ms. Marvel.” The TV show has a few significant changes from the comics (which I won’t spoil here). Kamala is played by actress Iman Vellani.

“Sanjay and Craig” is a cartoon that ran on Nickelodeon from 2013 to 2016 for three seasons (totaling 60 episodes). The series centers around the wacky misadventures of 12-year-old Sanjay Patel and his best friend/pet, a snake named Craig. A running plot is the duo trying to hide from nearly everyone the fact Craig could talk. To that end, Craig passes himself off to others in various human disguises. The duo also are forced to deal with their snake-hating neighbor, Mr. Noodman.

Sanjay is biracial; his father, Vijay (a store owner) is Indian, while his mother, Darlene (who works at a hospital) is White.

The first season of “Sanjay and Craig” received a now-out-of-print DVD set.

The entire series is available to stream on Paramount+.

Like most Archie characters, Raj has a dominant defining trait. In Raj’s case, he wants to become a film maker someday. To that end, Raj is frequently seen carrying a video camera; most of Raj’s stories center around film making.

A 2011 storyline in the “World of Archie” digest sees Raj and the gang go to India, after a Bollywood producer takes an interest in Raj’s skills.

Raj is a supporting character in the short-lived 2020 CW series “Katy Keene.” On the show, Raj is still interested in film making; like most of the CW versions of Archie characters, Raj here has a more adult-oriented backstory. Raj is played by actor Abubakr Ali.

“Katy Keene” is available to stream on HBO Max.

Connie‘s a major supporting character in the Cartoon Network series “Steven Universe.” As Steven’s best friend, Connie participates in various adventures with him and the Crystal Gems. It helps that Connie took up training in swordsmanship from Pearl.

Along with the above activities, Connie also has a strong interest in reading, which plays a role in some episodes.

“Steven Universe” is available to stream on HBO Max and Hulu.

“Sanjay’s Super Team” is a 2015 Pixar animated short that was paired up in theaters with “The Good Dinosaur.” It focuses on a young boy’s fascination with superheroes, which gets contrasted with his father’s religious values. The boy ends up daydreaming about Hindu gods as superheroes.

The short was directed by Sanjay Patel, who based the characters on his own childhood. It was nominated for the animated short film category for the 2016 Academy Awards.

“Sanjay’s Super Team” is available to stream on Disney+.