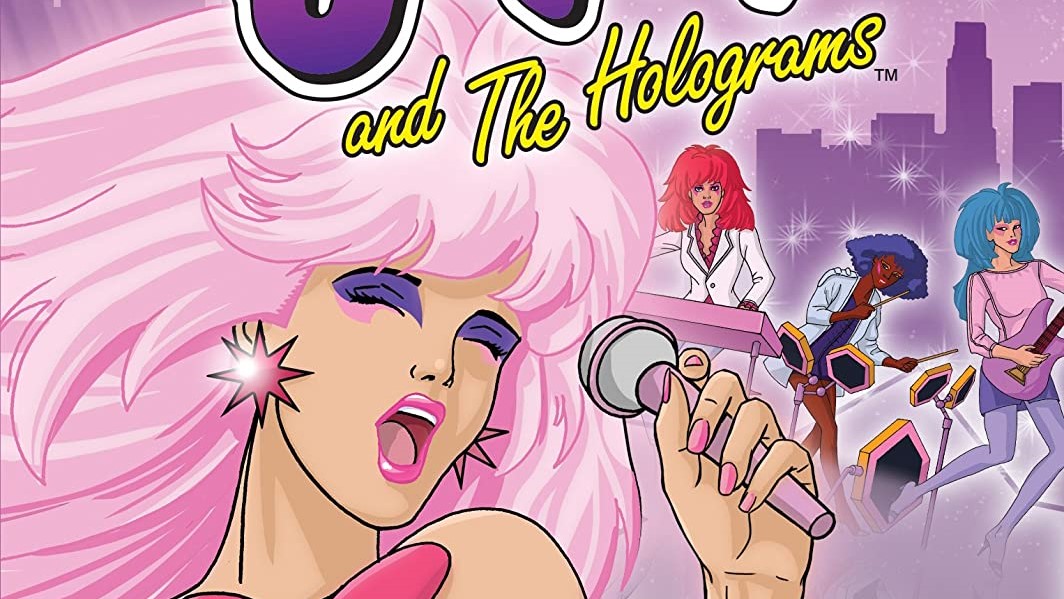 Today’s post takes a look at the 1980s cartoon series “Jem and the Holograms.” The series centers around the adventures of a rock group called the Holograms. “Jem” aired in first-run syndication from 1985 to 1988.

The show was co-created by Hasbro and Christy Marx. While “Jem” was based on a line of dolls, the show still developed a fan following in ensuing decades.

The series stars Jerrica Benton, the owner and manager of Starlight Music (a music label) and Starlight House (an all-girls foster home), both inherited from her deceased genius father. Jerrica’s father also left her with his greatest invention, “Synergy,” a powerful computer with the ability to create realistic holograms.

Synergy’s verbally controlled via the use of special star-shaped earrings Jerrica wears. Via Synergy, Jerrica created the flashy alter-ego of “Jem”; as Jem, Jerrica serves as the lead singer for the Holograms. Jem/Jerrica also has a classic Superman/Clark Kent/Lois Lane-style love “triangle” with Rio, a road manager for the Holograms.

Most episodes see the Holograms traveling the world, giving concerts, and having assorted adventures. The Holograms frequently deal with rival rock group “the Misfits,” a band without much in the way of ethics. The Misfits’ goal is to prove to the world they’re the superior rock group; to do so, they often resort to questionable (or outright illegal) tactics against the Holograms. The Misfits often rely on the aid of their sleazy manager, Eric Raymond, a former co-owner of Starlight Music. The final season introduces a third group, the Stingers, as a rival to both bands.

“Jem” ran for three seasons, for a total of 65 episodes. In keeping with the 1980s (and MTV’s popularity), each episode features at least one music video-style song number.

Besides Jerrica, the other members of the Holograms include:

After decades of reruns (and not much else), in 2015, “Jem” received a theatrical live-action movie. Unfortunately, the film flopped quite hard, with both poor reception by fans and poor reviews (it has a Metacritic score of 42). Despite a budget of only $5 million, it only made $2.3 million at the box office.

On a more positive note, 2015 also saw the release (via IDW) of an ongoing “Jem and the Holograms” comic. The comic keeps the TV show’s 80s-style pastel-explosion color schemes and big hair, but modernizes everything else. The comic features several openly gay characters, including Kimber. The “Jem” comic also features the Misfits, even giving them their own miniseries spin-off. The comic, written by Kelly Thompson and with art by Sophie Campbell, ran for 26 issues, ending its run in 2017.

Here’s the introduction for “Jem.”

Image from “Jem and the Holograms: Season 1” DVD. (Shout Factory)