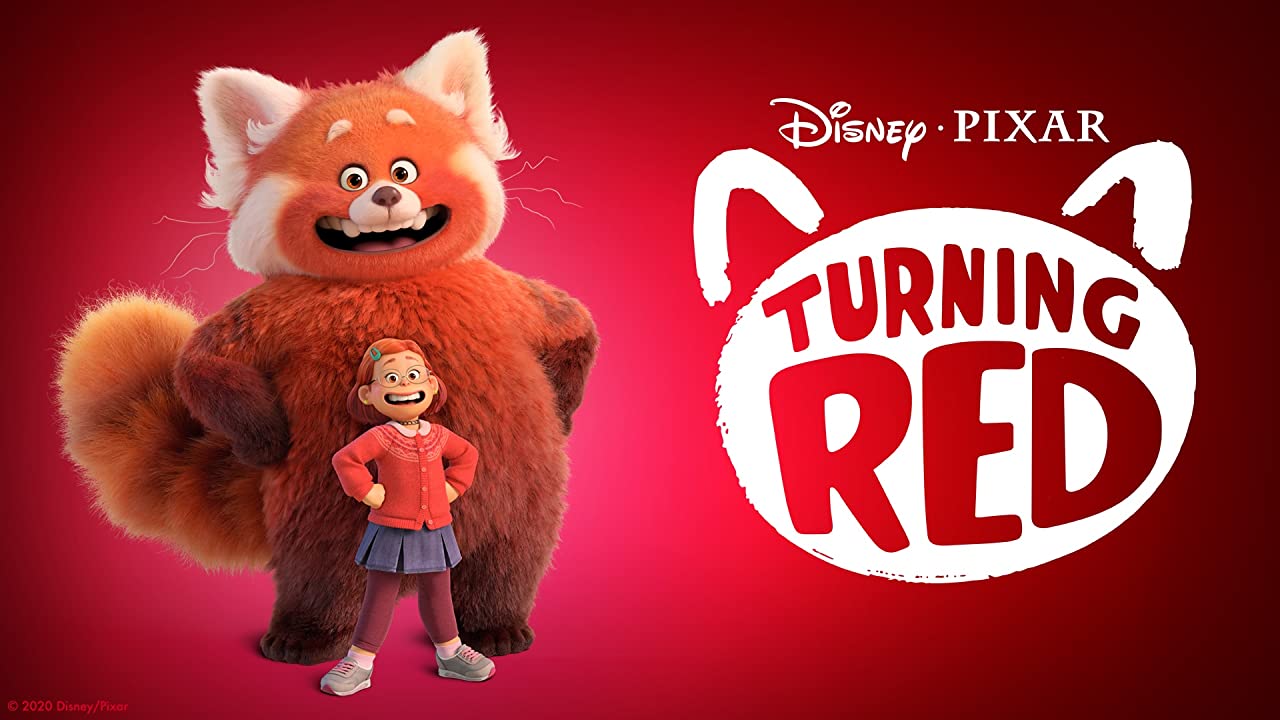 Today’s cartoon review looks at the 2022 Disney/Pixar movie “Turning Red.” The film debuted on Disney+ instead of in theaters, due to the pandemic.

A 13-year-old girl named Meilin turns into a giant red panda whenever she gets too excited.

The film’s set in Toronto in 2002. Meilin “Mei” Lee (voiced by Rosalie Chiang) is a 13-year-old girl who lives with her parents, a somewhat milquetoast father (Jin, voiced by Orion Lee) and an obnoxiously strict mother (Ming, voiced by Sandra Oh). As it turns out, a family curse kicking in causes Mei to start manifesting the ability to turn into a giant red panda whenever she’s emotionally stressed (similar to the Incredible Hulk). Between being a teenager and her mother, this means Mei’s stressed out a lot. Hijinks ensue, especially after Mei and her friends get wind of a concert by “4*TOWN,” a turn-of-the-millennium style boy band (similar to NSYNC or the Backstreet Boys).

I enjoyed the film; it shared some similarities to last year’s Pixar film, “Luca.” One thing that makes “Turning Red” stand out is that it’s set not in the distant past (like many Disney films), or a fantasy setting (a world of monsters/talking cars/etc.), but in Toronto… and 20 years ago at that. (Cue a number of “Millennials are getting old” articles.)

As such, the film includes plenty of references to both Toronto and its 2002 setting. The film’s concert is held at the SkyDome (renamed the Rogers Centre in 2005), the home of the Toronto Blue Jays baseball team. Toronto’s streetcars are seen, as well as Canadian currency (blue-colored $5 bills). Mei also has a virtual pet (remember Tamagotchis?), watches CRT TVs, and uses CDs.

The only major anachronism I can think of: one of Mei’s friends is reading a “Twilight”-like book about vampires. The first “Twilight” book was published in 2005; the popular image of vampires in 2002 was more influenced by various 90s/early 00s media: the “Blade” films, “Interview With the Vampire,” the TV version of “Buffy the Vampire Slayer,” Canadian TV show “Forever Knight,” etc.

“Turning Red” has also received a lot of discussion for the wrong reasons. A (now-deleted) review on CinemaBlend felt it was “limiting” in scope for the film to focus so much on Mei’s Chinese background. Certain online segments also expressed a dislike of the film, claiming its plot and protagonist “aren’t relatable.” Said crowd even tried downvoting the film on Metacritic and Rotten Tomatoes. (A reason I usually don’t pay attention to audience scores on those sites.) Personally, I’d say most of this criticism is driven by the usual suspects, racism (see above) and sexism (most of the main cast are girls/women).

Related to the latter (and also driving the backlash): one scene has Ming mistake Mei’s remarks (post-initial-transformation) to be about getting her period, prompting Ming’s nervous attempt at “the talk.” Menstruation is a topic that’s almost never mentioned or alluded to in animation, outside of a few adult-oriented cartoons. The only non-adult cartoon instance that immediately comes to my mind is an episode of Nelvana’s 2000s series “6Teen.” (Which was another cartoon set in Canada.)

While I don’t share Mei’s background, I can see plenty about her that’s relatable. Anxiety during adolescence is certainly common. So is dealing with celebrity crushes, parents, puberty itself (as mentioned above), etc. Some viewers might also share the same background as Mei and her family. Despite Disney’s ongoing problems, the past few Disney/Pixar films have tried improving diversity, including “Soul,” “Raya and the Last Dragon,” and “Encanto.”

For that matter, Mei isn’t the first Disney-owned character who turns into a monster when upset:

Bruce Banner, aka the Incredible Hulk, says “hi.” So does Marvel’s Amadeus Cho… a genius Asian-American teenager who also can turn into a monster (though with more control), as seen in Amadeus’ 2010s comic “Totally Awesome Hulk.”

Here’s a trailer for the film.