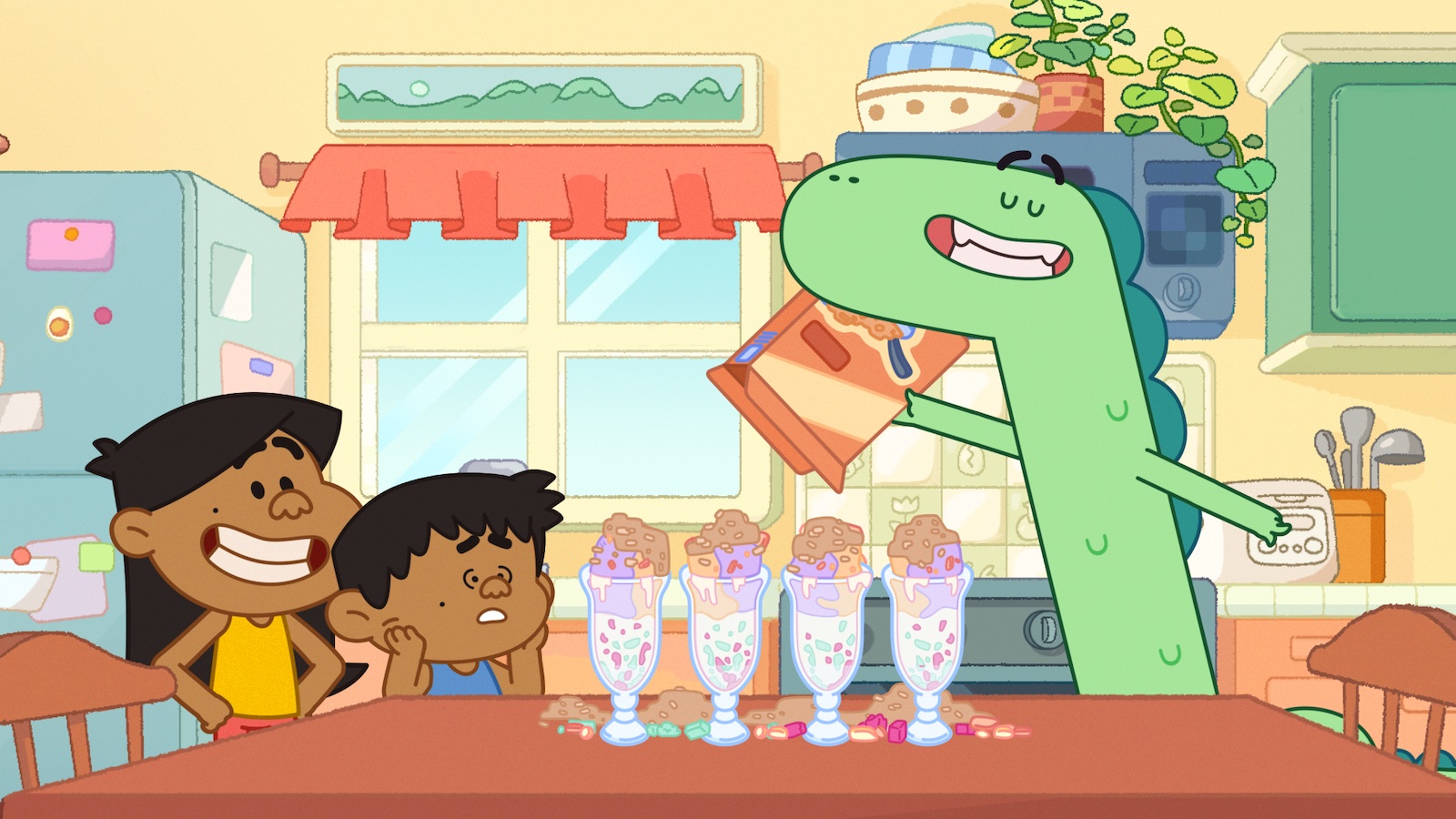 Today’s cartoon review is “Jelly, Ben & Pogo,” a series of shorts that air on PBS Kids.

The series debuted in 2021; “Jelly” is created/directed by Jalysa Leva. The entire series is also available on the PBS Kids streaming service, as well as YouTube.

The shorts revolve around Filipino Americans Jelly (voiced by Vanille Velasquez) and Ben (voiced by Jalysa Leva), and their friend Pogo (voiced by Christina Sivrich). Jelly is a cheerful older child, interested in coming up with creative solutions to problems. Her younger brother, Ben, is somewhat quiet, but similarly helpful. Pogo is the siblings’ sea monster best friend; she’s quite strong (she can lift a small truck single-handed), and is very enthusiastic. Pogo lives with her parents in an underwater house in a bay near Jelly and Ben’s house. The siblings sometimes visit her house while wearing diving suits, similar to Sandy on “SpongeBob SquarePants.”

The shorts feature similar plots: a problem arises for one or all of the trio; they all resolve to solve it; they think of or experiment with ways to solve the problem; finally, the problem’s solved.

A running gag is that the siblings will put a sticker featuring the trio’s faces on whatever object they’ve built to solve the problem.

Besides problem solving, “Jelly, Ben & Pogo” also highlights the Philippines and Filipino culture. This extends to the use of Tagalog words in the cast’s dialogue. Ben often calls Jelly “Ate,” a term of respect for an older sister. A TV program the kids and their grandmother watch (a kid-friendly telenovela?) also uses Tagalog words, including in an ad for the dessert halo-halo (described as “ang sarap,” Tagalog for “delicious”). Said grandmother’s referred to as “Lola” (“grandmother”) by the kids.

Filipino cultural aspects covered on the show include: dining styles (“kamayan,” a communal buffet where people eat using their hands versus silverware); traditional toys, such as the siblings’ father’s “trumpo” (a toy top); and, on a serious note, observing All Souls’ Day (November 2), when the family visit Lola’s late husband’s grave.

“Jelly, Ben & Pogo” is also one of the few animated cartoons on American TV starring Filipino characters. There’s a few cartoons with supporting characters who’re Filipino: “Molly of Denali”; “Motorcity”; “Steven Universe”; “Star vs. the Forces of Evil”; and “Craig of the Creek.” The only ones where Filipinos are the show’s star (that I could find as of this writing) are “The Nutshack” (a much-maligned, short-lived 2000s cartoon) and “Rick & Steve: The Happiest Gay Couple in All the World” (a 2000s cartoon on Logo); both were made by Filipino creators. However, both of those shows were aimed at adult audiences. “Jelly” might be the first non-adult American cartoon starring Filipino characters? (If not, feel free to correct me in the comments.)

There’s a few articles about the creation of “Jelly, Ben & Pogo”: