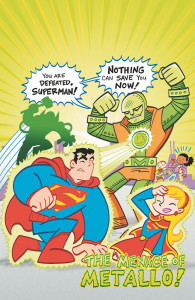 Classic 70s DC superhero Black Lightning is coming back this month in “DC Comics Presents.” This time, he’s being teamed up with Blue Devil (of all characters).

This month’s “Action Comics” promotes the return of Krypto (or the wolf-like-critter the “New 52” claims is the Dog of Steel). There’s also the first “New 52” Annual for “Action,” with the main story written by Sholly Fisch. The main plot sees Superman fight the “New 52” version of the Kryptonite Man, the adult version of old Silver Age Superboy foe the Kryptonite Kid.

Over in the kids’ comics line (is it still being called “Johnny DC”?), this month’s “Superman Family Adventures” sees Superman (and Supergirl) face off against this book’s version of Metallo. I notice Supergirl’s appearing heavily on the covers of this series (less so Superboy)…