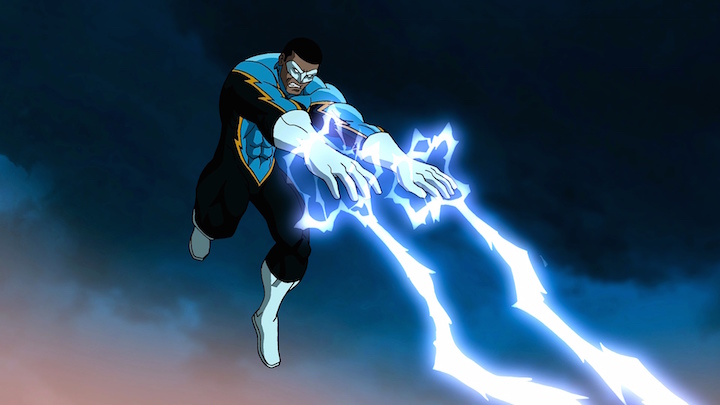 This entry, as well as several upcoming others, presents an odd superhero trope that exists. There’s the apparent tendency by comic writers (for some reason) to give Black superheroes some sort of electrical-themed powers. Black Lightning is one of the biggest (and earliest) examples of such. The superhero first appeared in “Black Lightning” #1 in 1977. He was created by Tony Isabella and Trevor Von Eeden.

Jefferson Pierce (Black Lightning’s real name) was originally a high school principal in Metropolis’ “Suicide Slum,” a rundown neighborhood plagued by organized crime problems. After the death of one of his students, Pierce decided to use his athletic skills and prowess to become the superhero Black Lightning. Pierce protected his secret identity by presenting his superhero self with a 70s slang-filled persona.

Initially, Pierce’s powers came from his costume. A later retcon established he really did possess electrical powers all along.

Black Lightning fought street-level crime in and around his Metropolis neighborhood. This included crimes too low-level for Superman to normally attend to, though their paths would cross. Eventually, Black Lightning met up with other heroes as well. He was even offered a position in the Justice League (which he turned down). Later, Black Lightning joined the Outsiders, a team formed by Batman. He also eventually changed his mind and joined the JLA itself.

Per the “Black heroes with electrical powers” shtick, one of Pierce’s two daughters also has electrical powers. She became the heroine “Lightning.” The other daughter managed (somehow) to escape this trope and “merely” get some sort of density-based powers. However, she still uses a thunderstorm-related superheroine name, “Thunder.”

Due to various reasons (including royalty issues, etc.), Black Lightning didn’t appear in any animated appearances until very recently. He made an appearance in “Batman: The Brave and the Bold” in 2009.

Several previous DC animated series made references to or used pastiches of Black Lightning. One example is the “Super Friends” character Black Vulcan.

Black Lightning’s also made appearances in “Superman/Batman: Public Enemies,” where he was voiced by LeVar Burton.