It’s official, “Supergirl” is coming to CBS this fall. The network’s picked up a full season order for the planned show.

SUPERGIRL is an action-adventure drama based on the DC Comics character Kara Zor-El (Melissa Benoist), Superman’s (Kal-El) cousin who, after 12 years of keeping her powers a secret on Earth, decides to finally embrace her superhuman abilities and be the hero she was always meant to be. Twelve-year-old Kara escaped the doomed planet Krypton with her parents’ help at the same time as the infant Kal-El. Protected and raised on Earth by her foster family, the Danvers, Kara grew up in the shadow of her foster sister, Alex (Chyler Leigh), and learned to conceal the phenomenal powers she shares with her famous cousin in order to keep her identity a secret. Years later at 24, Kara lives in National City assisting media mogul and fierce taskmaster Cat Grant (Golden Globe Award winner Calista Flockhart), who just hired the Daily Planet’s former photographer, James Olsen (Mehcad Brooks), as her new art director. However, Kara’s days of keeping her talents a secret are over when Hank Henshaw (David Harewood), head of a super-secret agency where her sister also works, enlists her to help them protect the citizens of National City from sinister threats. Though Kara will need to find a way to manage her newfound empowerment with her very human relationships, her heart soars as she takes to the skies as Supergirl to fight crime. Greg Berlanti (“The Flash,” “Arrow”), Ali Adler, Sarah Schecter and Andrew Kreisberg are executive producers for Berlanti Productions in association with Warner Bros. Television. The pilot was directed by Glen Winter (“Arrow”).

As mentioned above, other characters that’ll be on the show include Cat Grant (who’s the CEO of a company here) and Jimmy Olsen. Jimmy here is being cast as an African-American man in his early 30s, played by actor Mehcad Brooks.

To my knowledge, “National City” has never been used as a fake DC city name in the comics, which makes me wonder why they didn’t use one of the existing multitude of fake cities DC already has. (To avoid using a city that’s already associated with another superhero? For the same reasons they came up with “Starling City” instead of “Star City?” The only fake superhero city name that hasn’t been used?) In real life, there’s a suburb of San Diego named National City; given how California-centric Hollywood is, it wouldn’t surprise me if that were the origin of its name. The comics did have a “Federal City,” though, which appeared in a 60s Black Canary/Starman team-up story. DC also once published an anthology title called “National Comics” in the 40s.

“Supergirl” will debut in November, and air on Mondays at 8 PM, breaking CBS’ tradition of comedies at that timeslot. It also pits the Girl of Steel directly against “Gotham” on Fox, assuming no further schedule changes.

There’s no indication whether there’ll be any super-horses, super-cats, shape-shifting blobs of protoplasm, “Earth angels,” or enough different costume changes to keep a New York fashion house in business, like in the comics over the decades. Kara’s costume for this series, however, will look like this: 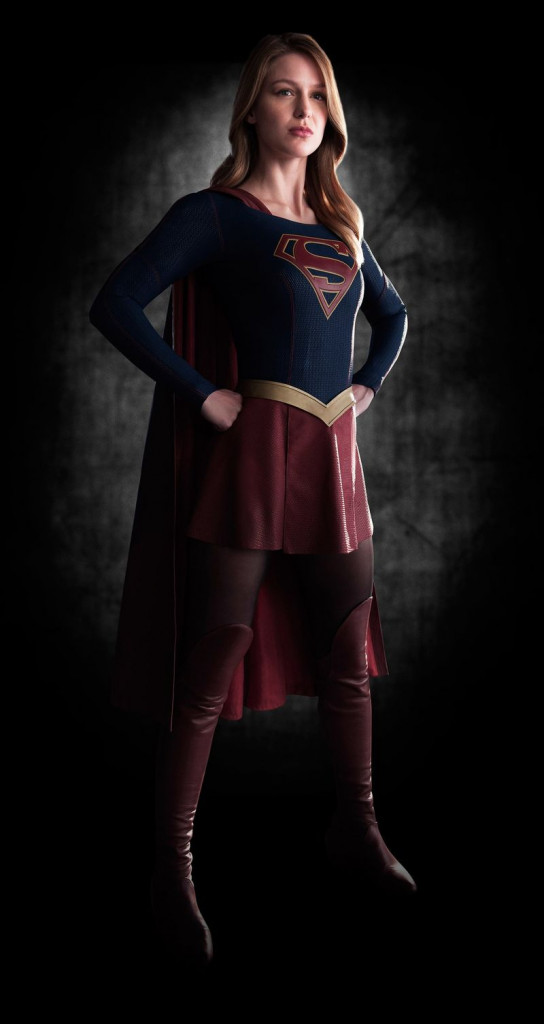 Basically a variation of her classic 60s look, but with tights. More encouraging signs are that we’ve gotten a newer photo of the costume, which will look much brighter and cheerful (if like DC’s New 52/movie costumes probably dated in a decade with that “I forgot how to sew, exposed seams” look): 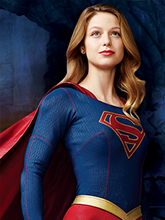 The premise for the series also seems to be a mix of Silver Age (Superman’s cousin from Krypton, raised on Earth by the Danvers family) and the 1980s Helen Slater “Supergirl” movie (Jimmy Olsen as a supporting character). So far, the only New 52-ism I see is in Kara’s origin story—the “sent as a teenager at the same time as her infant cousin Kal-El, but took longer to get to Earth” bit that rips off Power Girl’s classic origin. (Maybe Argo City would’ve been too much on a TV budget/too distracting.) That said, I overall expect “Supergirl” to stay firmly light-hearted versus DC/WB’s movies, if for no other reason than that CBS’ stereotypical viewers likely aren’t interested in grimdark superheroes, despite the network’s heavy number of crime procedurals. Another encouraging sign is that CBS also has a long history with well-received live-action superhero TV shows, most prominently “Wonder Woman” and “The Incredible Hulk” in the 70s and “The Flash” in the 90s.

The trailer for the series conveys the show will be fun to watch! My only nitpicks: