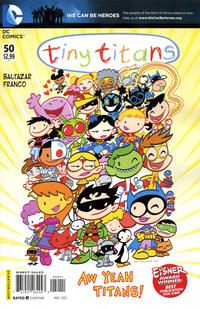 The plot is a typical Tiny Titans romp: Beast Boy’s crush on Terra and attempts to impress her; Robin and Cyborg discuss with Alfred about whatever happened to “that kid with the crown hat [and] his friend with the orange hair” (heh); and lots of new costumes, in a bit of foreshadowing/referencing the “New 52.”

The costume jokes and references were particularly funny (plus they found a use for that otherwise stupid looking “Lil’ Abner” costume of Supes’)… “[Beast Boy looks] like a green Superboy,” indeed. I’ll also miss the little captions below the final panels of each story section, which were often also pretty funny (“quesadillas!”).

The comic also contains a preview of the upcoming “Superman Family Adventures.” The pages here A) already look more like a typical traditional Superman outing than what we’re currently getting in the DCNU and B) are also hilarious (I liked Perry White’s moments). I hope the new title is successful…