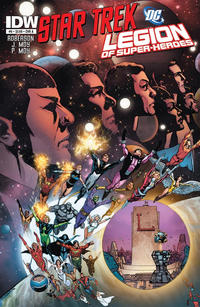 The final issue of this storyline’s here, and it ends on a note as much as I expected… (SPOILERS)

The crew stuck in the past work on freeing the trapped Q, which comes about thanks to Mr. Spock (and logic). Meanwhile, back in the future (yes, that odd statement applies here), Kirk and company deal with the agony booths, while Kirk explains to Vandal Savage of why he’s, well, such a throwback. And yes, as I predicted, the inevitable memory wipe comes, albeit in the form of a time-travel paradox wiping out the story’s events. The story ending seems slightly confusing (with Q and Flint together), though given Flint was (in Star Trek’s timeline) Jackson Pollock, of course he “had it in him,” Q…

About the only part I liked was Kirk explaining to Savage why he, well, lives up to his name, and why humanity’s moved on from being like him. I’m not a big fan of the “this entire story never happened and nobody including the time-travelers remember it” time-travel trope (which makes me feel like I wasted my time), with a few exceptions. Also not a fan of Q; yeah, we get it, we’re ants compared to you, Mr. My-name-is-an-algebra-problem-variable… albeit ones not dumb enough to get captured by Fred Flintstone’s evil cousin.

Thus, between this and the slow pace of the opening issues (which might read better in a trade paperback), I guess I can’t say I enjoyed this crossover (despite a few amusing moments), though it did have some nicely done covers. Hopefully IDW will have better luck with their upcoming Star Trek:TNG/Doctor Who crossover…