Recently, I’ve given the search engine “DuckDuckGo” a try 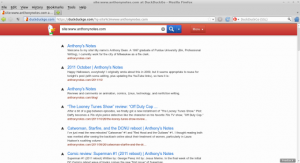 . DuckDuckGo, despite its somewhat-awkward name (named after the old children’s game “Duck Duck Goose”), is a search engine that’s designed with privacy and simplicity in mind.

Between Google’s increased bloat from its simpler, earlier days, plus the privacy concerns about Google that’ve been raised in recent news stories, there’s apparently a market for a simpler search engine that’s primarily just that. DuckDuckGo’s default page is reminiscent of Google’s earlier home page, with just a search box and a few links. Searches turn up relevant results comparable to other search engines.

Besides the simplicity, DuckDuckGo also puts an emphasis on privacy, with DuckDuckGo not tracking users’ search results to the degree Google does. (For the sake of being up front, I do use Google Analytics for my site, set up after my recent move to a new web host and not wanting to deal anymore with Piwik’s shortcomings.) Since the search engine doesn’t have a social network, etc. to push, it’s also a bit less aggressive feeling.

DuckDuckGo also offers a search plugin for Firefox, plus recently signed a deal with Linux Mint to be the official default search engine for that Linux distribution. DuckDuckGo also can give results for the temperature/basic weather, and can convert units (Fahrenheit to Celsius, US dollars to other currencies, etc.) like Google does.

As for shortcomings, DuckDuckGo lacks the ability to search for images like Google Images does. It does offer the ability to use other search engines (including Google, Bing, and Yahoo) to make up for any of its own shortcomings or to view another search engine’s results. DuckDuckGo (unless I missed something) also doesn’t seem to display warnings about possibly-harmful websites like Google does (with Google’s “this site may harm your computer” tag in searches).

Overall, DuckDuckGo is a pretty pleasant search engine. While I still rely on Google for various functions, I could see myself using it for general searching.

How to break up the tech giants?
7 favorite Chrome extensions
Favorite articles roundup for the week of July 26, 2019
A look at the world's most popular websites
DuckDuckGo, Google, search engine