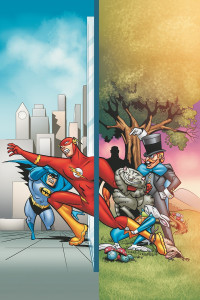 The All-New Batman: The Brave and the Bold #3

This issue’s full-length story (no cold opener) sees Batman and the Flash (based on the TV show, I assume it’s Barry Allen, though with some of Wally’s personality) teaming up to rescue the Golden Age Flash, Jay Garrick, from the clutches of the Mad Hatter and the Mirror Master. Unfortunately for them, while they save Jay, they manage to stumble into the two villains’ trap—a mirror that leads Bats and Flash on a one-way trip to a storybook dimension. The heroes are forced to spend the rest of the story trying to find a way back home.

The storybook land was entertaining enough. I can’t recall if DC’s published any non-Vertigo fairy tale comics in the past.

The old stand-by Flash trick of vibrating his molecules to travel across dimensions is raised, but dismissed by Flash as too risky in this situation. Surprisingly, for once Flash vibrating to “make scientific stuff happen” (i.e. anything short of creating money out of thin air) *doesn’t* save the day. Instead, Batman’s solution is, well, even more bizarre… but I’ll just go with it and give Bats the benefit of the doubt on this one. It’s his book…

Unrelated to the story above: I noticed several ads in this comic for Archie Comics, all of them promoting their line of digital comics. I wonder if this is a byproduct of their recent crossover with DC in “Tiny Titans” (as well as DC publishing their Red Circle line of superheroes), but it still seems odd. Not only is it an ad for a rival company’s product, but it’s also for Archie’s digital line. DC (and Marvel) still treat digital as of secondary importance (not wanting to harm their relationships with existing brick-and-mortar comic shops); meanwhile, Archie just announced this week they’ll be publishing its main titles digitally and in print on the same day (if you have an Apple device to read them on).

The comic shop retailers were rather dismissive/belittling of Archie’s digital efforts, even if they admit they don’t sell Archie for the most part; I presume even if it’s “just Archie,” they still view it as a threat (and don’t want DC or Marvel to get any ideas). Given all this, seems odd—or maybe ironic—to see the Archie digital comics ads in a print DC Comic that (not being a mainstream DCU set book) probably won’t be available in a legal digital format for months, if ever.