In 2010, DC Comics released this compilation as part of its “Greatest…Ever Told” series of trade paperbacks. DC in recent years has largely opted to either ignore the pre-Crisis Superboy (in favor of modern Superman backstory status quo or the Kon-El Superboy), hold him at arm’s length due to the ongoing Siegel/Shuster estates’ legal fights, or simply include Superboy stories as part of Superman reprints. This title’s one of the few Superboy-centered reprints in recent years.

Below are my thoughts on each story (warning: spoilers). Most of them date from the 1950s and 60s, plus a few from the 70s, and only one from the 80s Superboy revival.

As for the “team-up” in this issue? Besides with “Superman” (the explorer in disguise), it’s revealed that the explorer is… Professor Olsen, the father of the preschool-aged Jimmy Olsen seen at the start and end of the story. Presumably, sometime after this story, Jimmy’s family moved from Smallville, per this and later stories, including the next one below.

DC’s apparently taken this and a few other stories in the collection from later Silver/Bronze Age reprints, as Superboy’s dialogue in one scene is clearly altered to reference “the rays of my heat vision.” The original story, of course, would’ve used “the heat of his x-ray vision,” which is how Clark melted things in 1950s stories. Heat vision doesn’t become a separate power until the early 60s; quite late in Superman’s powers development, but true.

“A Visit From Superman’s Pal”

Jimmy Olsen is accidentally sent back in time to Superboy’s era, where he befriends the Boy of Steel and learns his secret identity. (Of course, he forgets by the story’s end.)

This story seemed to ignore the previous story showing a very young Jimmy already living in Smallville. It also probably pre-dates DC’s Silver Age Superman time-travel rules that state one would turn into an invisible phantom if visiting an era in which they’re alive. (A few stories, however, would show the past version of someone switching time-eras with their future selves if the latter shows up, though there’s no indication Superman was taking care of a 4-year-old Jimmy Olsen…)

Clark gets a job briefly at the “Daily Planet” as an intern, but has a hard time writing stories since he keeps going into action as Superboy. Additionally, his boss, Perry White, keeps forgetting or mangling his name, with everything ultimately ending poorly for Clark.

Besides Perry (who’s a “managing editor” here, not still a “Planet” reporter like in some other Superboy stories), a teenage Lois Lane also briefly appears, trying unsuccessfully to get hired at the paper. “Who’s Who” from the mid-80s claims Lois did get hired as a reporter during summer breaks in college. This keeps with Lois being a “Planet” veteran by the time Clark joined. 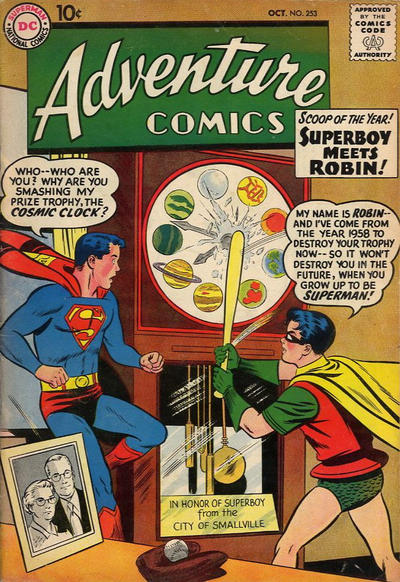 Robin visits Superman at the Fortress to find he’s been the victim of a kryptonite-laced bomb in a clock trophy he received as Superboy. Robin uses Professor Carter Nichols’ help to go back in time to stop Superboy from receiving the clock.

This is one of the more frequently reprinted stories in the collection, probably since it also would fall under Batman/Robin-related material. A late 70s “World’s Finest” story recalls this tale, noting that the heroes are “smarter about time-travel now,” given the then-present rule that the past was unchangeable.

Professor Nichols, of course, was a recurring character in Golden and Silver Age Batman stories, sending Bruce and Dick into the past using the bizarre means of “time-travel hypnosis.” By the late 50s, he eventually developed the device of a “time ray” (used in this story) to make his time-travel means somewhat more plausible, though he still made some use of his hypnotic gestures (as seen in a “World’s Finest” story where he sends Clark back in time along with Bruce and Dick to meet the Three Musketeers).

Nichols largely vanished after the “New Look” Batman came along, and has only been sporadically shown since, most recently in a 2000s Batman storyline. Nichols and his time-ray (but not his hypnosis) also appeared in the TV series “Batman: The Brave and the Bold.”

Clark’s time-viewer picks up on the future doings and identity of Green Arrow, whose teenage self moves briefly to Smallville a few days later. Clark tries to get Oliver interested in archery, except for one problem: Oliver’s a terrible marksman.

Supergirl learns that Superman felt lonely without a super-playmate as a kid, so goes back in time to be such for Superboy, before erasing the memory of her visit.

A common theme in Superboy stories seemed to be how he’d sometimes feel lonely as Earth’s only major super-powered superhero. The story points out that he still had Krypto and his robots, but notes it’s not quite the same. Of course, the Legion of Super-Heroes should’ve been mentioned, though they’re in the future, so perhaps also not the same. Superboy’s time-era eventually did gain one other major superhero (see below).

The famous Silver Age origin story for Lex Luthor, and his animosity toward Superboy/Superman. It’s also the first time a first name for Luthor is given in any story.

“Superboy and the Mermaid From Atlantis”

Superboy meets a teenaged version of Lori Lemaris, the mermaid he dates in college. However, here she’s mischievous, though eventually learns her lesson. Of course, Superboy and Lori both forget meeting each other by story’s end.

What saves this story from being completely unremarkable is that it’s probably the first story that tries to account for the differences between Aquaman’s version of Atlantis and Superman stories’ version, by showing there’s a domed city with humanoid people versus mer-people. A later Superman/Aquaman team-up story would give both cities their names and make clear the DCU’s Atlantis is a continent, not a city.

A teenage Jor-El accidentally ends up on Earth in the future, and pals around with Superboy for awhile. Yep, you guessed it, Jor-El forgets about the visit by the end.

“Dark Strangler of the Seas”

Superboy first meets and teams up with a teenaged Aquaman, who’s calling himself “Aquaboy.” The two team up to fight pollution threatening Earth’s oceans.

“The Forging of Young Batman”

Superboy discovers a newspaper headline about the Wayne murders, and goes to Gotham City to see Bruce, who he’d met in several previous stories. Bruce is still angry, and thinks he’s found the murderer—a supposed “Zodiac Killer” in Gotham City. To this end, Bruce takes up the identity of “The Executioner.”

An interesting story, though a bit problematic… and I can see why it’s ignored in later pre-Crisis accounts of how Bruce and Clark met. For one, Bruce is usually shown as eight years old when his parents are killed, with Clark about the same age (and having just started his Superboy career), not a teenager as seen here.

Second, while Bruce is in Bat-training, the only identity he assumed during this time (as recalled several times) is as the “first” Robin…and that was only so he could learn in secret aspects of criminology from Gotham City detective Harvey Harris.

Finally, an odd line when Bruce asks Superboy how he’d feel “to be an orphan,” when it’s common knowledge Superboy is an orphan (exploding planet and all, remember?).

The story’s also interesting from a modern standpoint in that people were hoping to see a teenage Bruce Wayne appear on “Smallville.” The very young Bruce on “Gotham” also seems similarly angry and engaging in risky behavior. However, there’s no mention of Smallville on that series as of this writing.

While not shown here, the later “World’s Finest” story notes Superboy eventually erased his own memory about Bruce’s future as Batman (which kept coming up in this story), deciding it’s for the best.

The Kents travel to Coast City, California for a relative’s wedding. Accompanying them on the same flight is one Harold Jordan, who shows an odd lack of fear in various situations. One guess who he grows up to be, of course.

Besides showing Hal the same age as Clark, the story also shows Superboy’s setting having moved to the mid-to-late 60s. (Clark at one point states a dislike of the Beach Boys and a preference for Andy Williams.)

Smallville’s shown as explicitly on the east coast; it didn’t gain its Kansas location until the Byrne reboot in 1986. A few Californians Superboy saves misremember the name of his hometown. (“I thought Superboy lived on the east coast…a town called ‘Littleville’?” “Er, Smallville, sir!”)

Metropolis is also within driving distance of Smallville. See
my earlier post on Metropolis, Smallville, and Gotham City’s locations over the years.

Overall, it’s an enjoyable volume of stories that old-time Superboy fans will enjoy. Completist Batman, Robin, Aquaman, etc. fans might also be interested in this volume.