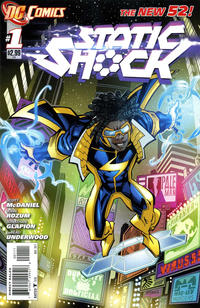 Popular Milestone Comics character (and later star of his own TV show) Static is getting rebooted in the “DCNU” as well, and this features his debut issue. The book’s premise is that Virgil Hawkins and his family have all relocated from (fictional) Dakota to New York City, where Virgil has an after-school job with S.T.A.R. Labs… and, as Static, secretly works for the high-tech hero Hardware (another old Milestone character, with an Iron Man-like suit of armor).

In this issue (SPOILERS), Static stops an electrical-themed villain, stating in the editor’s boxes his knowledge of science. We later see Static’s being secretly analyzed by an organized crime group making use of technology and metahumans to do their misdeeds. (Between this and Action Comics #1, wonder if the other rebooted DC titles have secret groups tracking those heroes, too…). There’s some level of swearing through the story, making this less kid-friendly than the animated series, though I suppose it keeps with the tone of some of the original Milestone books. My main criticism of this issue is its ending—haven’t we had *enough* limb decapitations for quite awhile, DC Comics writers? Just hope Aquaman keeps everything intact *this* reboot…

We also get some fun scenes of Virgil’s home life. When Static debuted in the early 90s, I’d have been his age, but now that I’m closer to his father’s age, I can see Dad’s point on the car issue. I’m not sure how many teeangers in New York City have driver’s licenses (or would bother with such) anyway, given its excellent mass transit system. And that’s one pretty lousy school ID Virgil has… his clothes/haircut look like something *from* the early 90s!

I’ll be back for the next issue, hopefully with more cool high-tech stuff and less limb-severing…