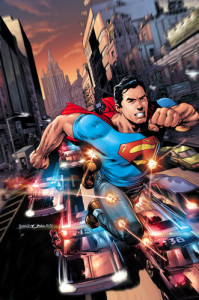 After much hype, we finally get the first issue of the rebooted-for-2011 version of “Action Comics.” “Action” was the original Superman title, first appearing in issue #1 in 1938. Though Batman’s “Detective Comics” predates “Action” by three years, Batman himself didn’t appear until issue #27 in 1939.

The plot (SPOILERS): Superman rescues various people, handles a train derailment, and wrings a confession out of a crooked businessman, all while being tracked by some secretive government group.

Yes, like how Hollywood is enthralled with reboots nowadays, there’s plenty of reboot-style changes to Superman’s backstory here. He’s no longer married to Lois, per this taking place in his earliest days as a hero. Clark is shown living in Hob’s Bay (a depressed part of Metropolis) and working for a rival paper to the “Daily Planet,” but is also best friends with Jimmy Olsen, who has a Moe Howard of “The Three Stooges” haircut here for some reason. The landlady mentions “two men and a (blonde) woman” stopping by for Clark… a possible reference to his Legion of Super-Heroes pals (Cosmic Boy, Lightning Lad, and Saturn Girl)? Despite that bit of Silver Age-ness, most of the other elements in this story seem to be taken from either the Golden Age comics (Superman’s power levels, stopping a domestic abuse victim) or are holdovers from the 1986 John Byrne reboot, the previous long-lasting Superman reboot. The latter’s holdovers would include Lois’ father, Sam Lane, still being a US Army general (here doing his best “Thunderbolt” Ross impersonation); LexCorp still being around; and Lex still being a businessman of some sort.

And yes, that’s “early Golden Age power levels,” with post-Golden Age addition of heat vision included (here shown as some “Terminator”-style eye effect Clark uses to intimidate others). Superman here is shown being barely faster than a speeding bullet (people are filming him racing down a Metropolis street on their smartphones), barely more powerful than a locomotive (he struggles to stop a derailing train from *completely* demolishing its surroundings), and can only leap tall buildings—the fabled “only leap an eighth of a mile” (660 feet, or 201 meters), as was the case in early stories.

Per my research, that’d mean he could only leap over Milwaukee’s tallest building (the US Bank Center, at 601 feet/183 meters), and just *barely* clearing it. (This ignoring a few early stories claiming he could only hurdle a “20 story building” tops.) Given Metropolis is supposed to be a New York City stand-in (much bigger than Milwaukee), and it’s 2011 (not 1938), not sure how well this is supposed to work out in a modern skyscraper-filled city. I imagine comic fans who complain about Superman supposedly being “too powerful” will be pleased.

Such complainers include, oddly, the artist drawing this story, Rags Morales, who doesn’t seem to be much of a fan of Superman, aside from his earliest version. I wonder why DC chose him to draw such a high-profile issue in that case, especially since I doubt Clark will be stuck at 1938-power-levels for long. Anyway, I presume “Smallville” fans will also like such a lower-powered Superman, assuming they’re even aware of this reboot. And since this is a multi-part story (though not as decompressed as “Justice League” #1 was), I wonder if the new readers will remember to come back for parts two, three, etc.

I’ll assume the general public won’t be turned off by a first issue cover of Superman running *from* the police (who’re shooting at him), though a comic shop dealer in South Carolina *was* turned off by Superman grunting “GD” (which he thought was a curse word)… or at least *claimed* to be, since it sounds like an attempt at publicity. Bizarre.

Anyway, while I’d rather have a Silver/Bronze Age-influenced Man of Steel over a 1938-influenced one (though I like the “fighting for the little guy” emphasis that Superman usually embodies, particularly emphasized in both this story and the original Depression-era stories), Morrison’s writing made this an amusing enough read. Lex here is similar to his “All Star Superman” personality, which should keep things interesting in future issues. And unlike “Justice League” #1, Superman’s general supporting cast actually shows up in this story.

One more nitpick: I still hate this costume, which looks like something Li’l Abner would’ve worn (as some online are calling it). Given the set-in-the-same-time-period JL story above shows him in more recognizable togs, I assume this “reminds me of my Superboy Halloween costume from when I was five” outfit will go away quite soon, and he’ll get a “real” costume (well, the one resembling the upcoming movie’s costume, anyway).

Cartoons at the box office: “The Book of Life” opens with $17 million, third place