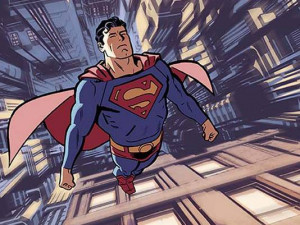 Yes, you read the subject line correctly: DC’s quietly announced that their digital-first weekly Superman anthology series “Adventures of Superman” has been canceled, as of today’s issue, issue #51. Its replacement? A new comic based on a video game, in this case “Infinite Crisis.”

For the past year, “Adventures” (along with the also-axed “Superman Family Adventures”) has been my favorite New 52-era Superman title. Avoiding or ignoring everything about the New 52, this series featured classic-style Superman stories, with most of the cast (Lois, Jimmy, etc.) in their familiar forms. The title made news this time a year ago over its then-planned, then-dropped initial plan to use Orson Scott Card to write the first few issues.

Now, it’s been given the axe, with no indication if it’s due to low sales (gather it’s being outsold by the less-than-respectful-to-Supes “Injustice: Gods Among Us” title), or just to clear space for said video game tie-in. The cancellation also came with zero advance announcement or warning, despite a well publicized interview last week with Jerry Ordway and Steve Rude for issue #51 (now the final issue…no actual one-year anniversary for this title, apparently). I only learned about it this morning when buying the issue on Google Play, to find this in the issue description:

In the series’ final chapter, legends Jerry Ordway and Steve Rude tell the story of Superman’s first encounter with a hero from the future, OMAC: the One-Man Army Corps.

A few others on Twitter found out the same way. The cancellation was confirmed by the solicitation for “Infinite Crisis.”

With this title gone, that leaves the only DC material I’m regularly buying being “Scooby-Doo Team-Up” and “Batman ’66.” A bit more money on hand to try a few other companies’ titles, I suppose…