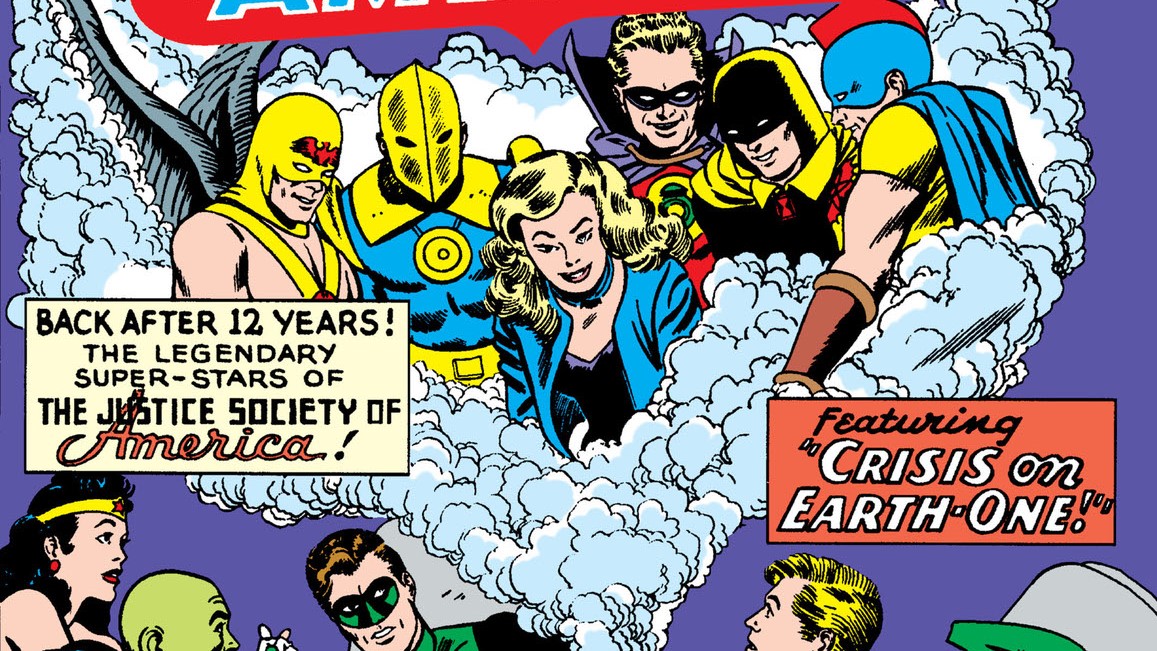 One of the ongoing old-school comic traditions was the annual Justice League of America/Justice Society of America team-up. After the introduction of DC Comics’ multiverse with 1961’s “The Flash of Two Worlds” (“The Flash” (vol. 1) #123, September 1961), DC expanded upon this with several other cameos by Jay Garrick (the Golden Age Flash), before fully bringing back Jay’s former team, the Justice Society. The JSA eventually met the JLA in “Justice League of America” (vol. 1) #21 (August 1963), initiating an annual series of team-ups between the JLA (of Earth-1) and the JSA (of Earth-2). The team-ups were usually named “Crisis on Earth-<something>” or “Crisis in/on <name of story’s setting>.”

Said team-ups came to an end in 1985 with “Crisis on Infinite Earths,” which rebooted/eliminated DC’s multiverse in favor of a single universe containing all of its superheroes. While “Crisis” was done in the name of revamping DC’s line/making DC’s continuity clearer, it ultimately raised as many problems as it solved. DC eventually changed their minds in the mid-2000s, and brought back a (new/different) multiverse. The multiverse has stuck around to this day, though with a few tweaks (such as not using the hyphen in Earth names, for some odd reason). That said, while the JLA and JSA still meet in modern comics, it’s usually in the same universe, and as part of the endless modern parade of crossovers/”event” storylines, so it’s not quite the same.

Below is a list of my 10 favorite classic JLA/JSA team-ups, in no particular order. SPOILERS ahead.

This was the original JLA/JSA team-up that started it all, so it gets placed here by default. It’s an entertaining enough story, though the other team-ups eclipse this one.

One of the all-time classic team-ups, this one sees the JLA and JSA face off against the Crime Syndicate of America from Earth-3. The Crime Syndicate members are evil versions of the JLA: Ultraman, Owlman, Superwoman, Power Ring, and Johnny Quick… counterparts of Superman, Batman, Wonder Woman, Green Lantern, and the Flash respectively.

Earth-3 is your typical “Star Trek”-style mirror-universe Earth, with a “reversed” history (England winning independence from the United States, Abe Lincoln shooting John Wilkes Booth, etc.). As such, this Earth only had supervillains (until a heroic Lex Luthor came along).

The Crime Syndicate would make plenty of return appearances over the decades; like the rest of the DCU, they’re “darker and edgier” in recent depictions. (The post-New 52 version of Ultraman snorts kryptonite like cocaine, for instance. *Sigh.*) The Crime Syndicate eventually starred in a direct-to-video movie, “Justice League: Crisis on Two Earths,” in 2010.

This one sees the JLA and JSA team up to fight the threat of Aquarius, the rogue star-god.

Given 1969 is the height of the “flower power” era, I assume the inspiration for this story’s the prominence at the time of astrology in popular culture. R&B group the Fifth Dimension’s classic song “The Age of Aquarius” also came out as a single in March 1969.

The story’s most prominent aspect is the death of Black Canary’s husband Larry Lance, and her subsequent move to Earth-1. There, Dinah joined the JLA, staying on the team until its mid-80s disbanding/overhaul. The 80s also saw Black Canary retconned into actually being two people (a mother and daughter) going by that name. With some streamlining (an instance of post-Crisis continuity actually being clearer), this has stuck since.

On a lesser note, this is the first story to introduce the Earth-2 Superman, who represents and incorporates elements from the earliest Superman stories. Kal-L gains his trademark greying sideburns and more lopsided “S”-shield logo by later team-ups.

This story, a three-parter celebrating the JLA comic’s 100th issue (and tenth JLA/JSA team-up), saw the teams unite to rescue the time-lost Seven Soldiers of Victory, a group of 1940s superheroes. They’re the only ones who can defeat their old foe, the Iron Hand, who plans to crush Earth-2.

This one’s an entertaining time-travel story, with readers introduced to this group of classic heroes. The only nitpick might be that the story’s only non-White human superhero, Wing (Crimson Avenger’s sidekick), is the “Unknown Soldier” who bought the farm. The heroes also briefly face (in the past) a group of Native Americans, though (Earth-1’s) Green Arrow agrees with their concerns about what will happen once more White settlers come along.

This year saw the JLA and JSA meet the heroes of Earth-S (namely, Captain Marvel, Mary Marvel, Captain Marvel Jr., plus the other Fawcett heroes which the book collectively dubs “Shazam’s Squadron of Justice”). The three sets of heroes work to overcome a plot by King Kull, an ancient “beastman” conqueror from prehistory.

This one gives us an appearance by Earth-2’s Batman and Joker. The final issue gives us on the cover the long-promised Superman vs. Captain Marvel throwdown… well, less so in the issue itself. (Cap and Supes do meet again in a late 70s special.) Finally, Wonder Woman (of Earth-2) looks like the only “adult” in the room (i.e. actually concerned about this), while the other heroes look pumped up for this fight!

The JLA and JSA team up with the Legion of Super-Heroes in the 30th century. Not only do the heroes battle Mordru the sorcerer, but also the “Demons Three” (Abnegazar, Ghast, and Rath). The latter is a trio of magic-using demons from ancient history, who were freed from imprisonment by JLA foe Felix Faust.

By this point, the younger/newer members are getting involved in the team ups, as then-new JSA member Power Girl appears here.

The Legionnaires are in their late 70s-era membership (and costumes) in this one.

Finally, the text on the cover for #148 (besides noting the Demons Three are apparently so “mighty it takes 19 heroes to fight them”) reminds me of the 70s Billy Preston song “Will It Go Round in Circles.”

This particular team-up sees the death of JSA member Mister Terrific, and the investigation into trying to figure out the identity of his murderer. Said murderer isn’t caught in this issue… but oddly, in the pages of the Spectre’s own comic years later, in the 90s (though as a flashback set right after the events of #172).

Despite his minor stature, Mister Terrific did gain a heir to his heroic legacy: Michael Holt, an African-American genius (Earth’s third-smartest person) and the current Mister Terrific.

On the JSA’s side of things, the Huntress (Helena Wayne) is also involved in this case.

The JLA, JSA, and New Gods face off against the threat of both the Injustice Society and the villains of Apokolips. All that plus Darkseid lets this team-up easily make the list.

As for the varying artists, Dick Dillin (the longtime 70s JLA artist) passed away after finishing issue #183; George Perez took over on art duties for the rest of the story.

Members of the JLA and JSA are hunted down and captured by the Secret Society of Super-Villains, led by the Ultra-Humanite, the Earth-2 Superman’s very first super-powered foe. It’s all a bizarre “cosmic balance”-tied plot to eliminate all heroes on one Earth, by capturing and sending to limbo 10 JLAers/JSAers.

The Ultra-Humanite’s seen in his now-classic giant albino ape form here. We also get appearances by now-forgotten Golden Age foes the Monocle (a guy with a trick monocle) and Rag Doll (a “triple-jointed” man dressed like an evil Raggedy Andy). From the Silver/Bronze Age, we get minor Batman foe Signalman, who uses signals in his crimes. Despite his second-tier stature, Signalman’s stuck around in sporadic appearances all these years, even appearing in the New 52 reboot.

I like how the narrator notes Johnny Thunder’s fashion sense went into “permanent stall” back in the 1950s.

This was the most complicated JLA/JSA team-up of all, and that’s saying something. Not only are four parallel Earths involved (Earths-1, -2, -3, and -Prime), but time-travel’s also involved. The main villain of this whole mess is Golden Age JSA foe Per Degaton, who’s joined by a return appearance of the Crime Syndicate.

By this point, DC decided Earth-Prime isn’t the “real world,” but just a world extremely similar to it. (A 70s JLA story saw Earth-Prime gain a metahuman named “Ultraa,” before he moved to Earth-1.) Earth-Prime was annihilated several years later in “Crisis on Infinite Earths,” but got a Superboy beforehand, the now-villainous-thanks-to-2000s-stories Superboy-Prime.