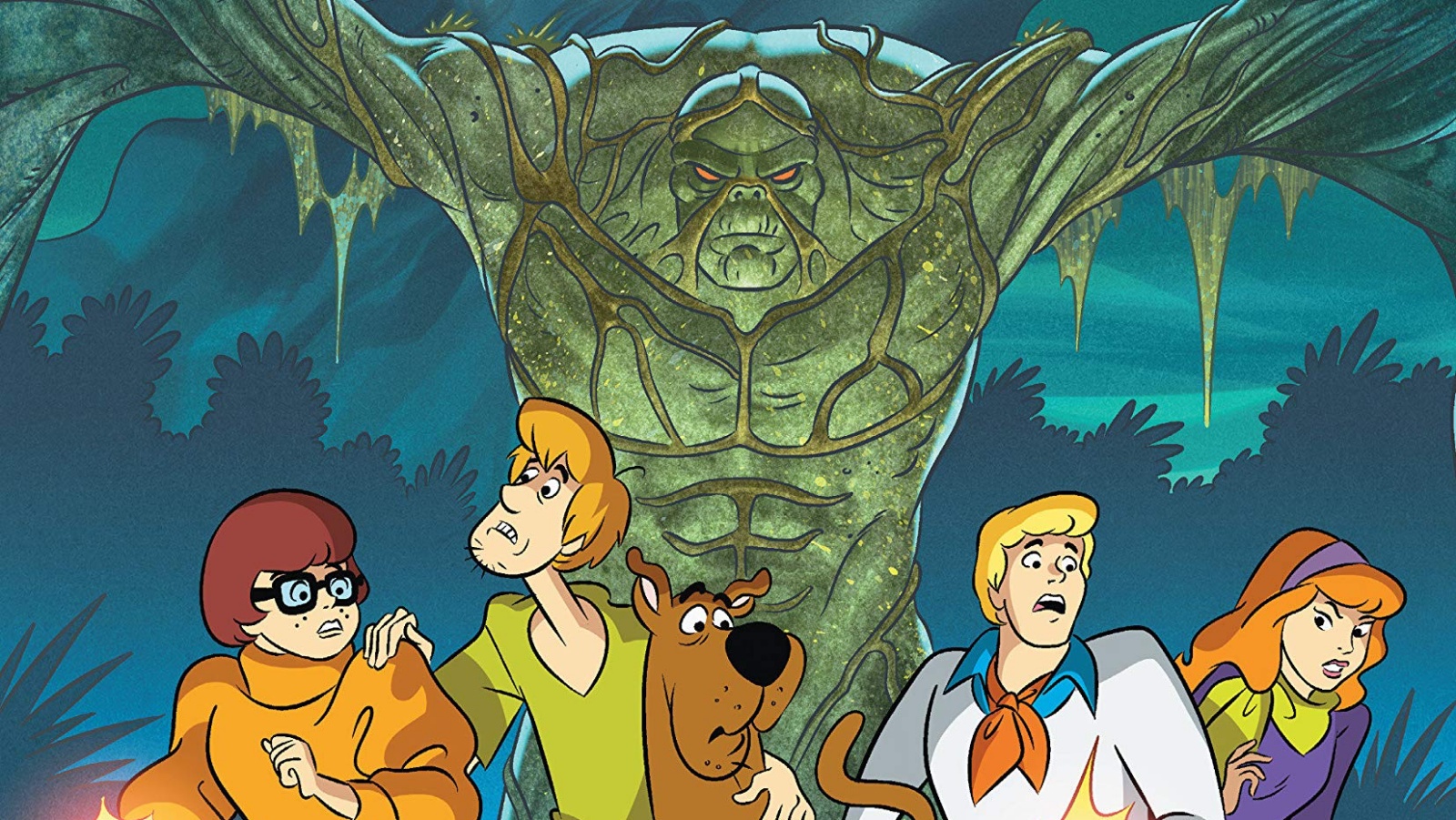 Another volume of “Scooby-Doo Team-Up” has been released as a trade paperback. The entertaining series (which as of September 2019 has ended) features another round of the Mystery, Inc. gang teaming up with various characters from the Hanna-Barbera and DC Comics universes.

Plot: Supergirl needs the gang’s help to uncover why the Danvers’ household is being haunted by the ghosts of her Kryptonian parents and friends.

There’s a lot of Silver Age Supergirl references in this story, down even to its title (“Nasty Tricks”). Streaky appears here as well, gaining a rivalry with Scooby.

Plot: The Blue Falcon’s acting oddly darker and edgier (and out of character), giving Dynomutt reason to summon Mystery, Inc. to Big City to investigate.

This one was pretty amusing, and also a throwback to the gang’s several appearances on the 70s “Dynomutt” TV show. An earlier story’s throwaway gag mentioning Dynomutt also ends up getting resolved here. (“Trademark infringement,” heh.) And yes, Blue Falcon is very much a Batman pastiche—at the time he was created, Hanna-Barbera and DC Comics weren’t owned by the same company.

Plot: To defeat monsters wreaking havoc in Washington, DC in the present day, Doctor Fate takes Mystery, Inc. back to the 1940s, to team up with the Justice Society of America.

This story’s one of the best DC team-ups the series has had. Seeing the JSA in action in their Golden Age prime was entertaining.

The story also touched on a few of the lesser aspects of the 1940s. Sexism comes up when Daphne learns Wonder Woman’s also the JSA’s secretary, despite her being royalty and one of the most powerful members of the team.

Racism and xenophobia also comes up in a portion featuring Velma, Dr. Fate and a rally of kids. To my knowledge, this is the first time a “Scooby-Doo” story’s directly mentioned the existence of racism; given the current state of American affairs, it seems particularly timely. Especially so Velma calling beliefs like “go back where you came from” as “nonsense.”

This is also (as far as I know) the first time the Scooby-Doo gang’s fought actual Nazis (not counting a 70s Charlton story), something that’s also come up again in real life recently.

The JSA here features a mix of Golden Age elements and modern (post-Crisis) retcons. To wit:

The Justice Society members seen in this story include:

Oddly, nobody commented on the Mystery, Inc. gang’s clothes. While the gang’s look is extremely outdated today, ironically it’d likely look “futuristic” in the 1940s.

Plot: The gang go to a Louisiana swamp to uncover the mystery of locals becoming zombies, and meet up with Swamp Thing.

No, this isn’t anything like “Scooby-Doo on Zombie Island,” but still an amusing enough story.

Plot: The gang try to help Penelope Pitstop, who’s being threatened yet again by the Hooded Claw.

A crossover with “The Perils of Penelope Pitstop.” Oddly, “Scooby-Doo Team-Up” didn’t feature “Wacky Races,” but instead its two spin-offs. (Though Penelope mentions she “used to be a race car driver” and explains why the Ant Hill Mob’s members are slightly different in her own series.)

Interestingly, this story also serves as something of a series finale for “Perils,” which the TV show didn’t provide. Most of the other crossovers in this comic didn’t change the guest stars’ status quo or any ongoing plot points.

Plot: The gang are summoned to a city being attacked by various villainous apes.

DC has had a long list of primate characters, from Detective Chimp and the Ultra-Humanite to obscure Batman foe the Gorilla Boss of Gotham City (a mobster in an ape’s body). And yes, they actually created a Nazi vampire gorilla (Pryemaul).

Thus, this story’s one of the zanier team-ups in the series, especially for the DC side of things. (As a rule, the series’ Hanna-Barbera team-ups tend to be wackier than the DC ones.) Still, it’s pretty hilarious to see Gorilla Grodd grow increasingly annoyed by his primate teammates’ antics.

Plot: The gang meet up with the Doom Patrol, a team of heroic outcasts.

This team-up particularly stood out, given the nature of the Doom Patrol’s more modernized versions. We get a Danny the Street appearance in a Scooby-Doo story, for starters.