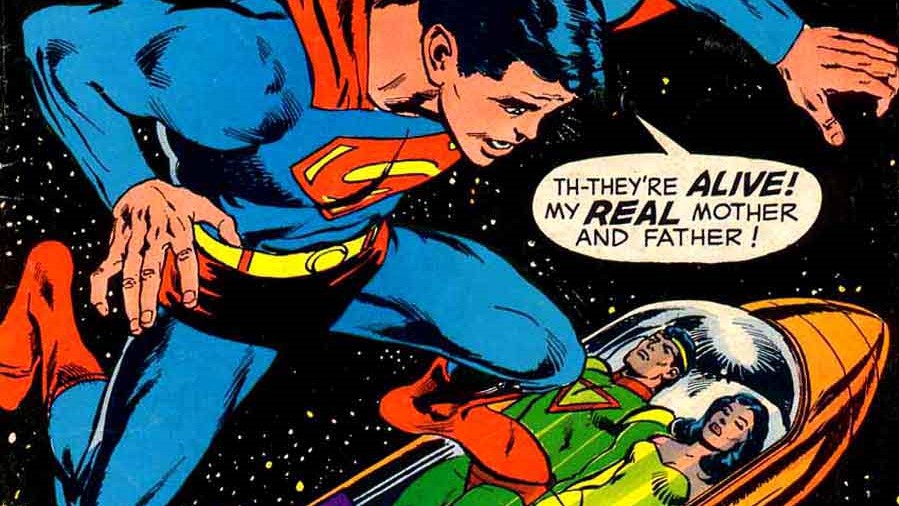 The retcon (short for “retroactive continuity”) is a pretty ingrained part of superhero comics. The fact the “Big Two” (DC Comics and Marvel) have been publishing nonstop since World War II have led to a lot of changes. Still, not all of these retcons are necessarily good ones, and thus, here’s a look at some of the worst DC Comics retcons.

I’m focusing on DC since I’m more up on its minutiae than Marvel. DC’s also been rather retcon-happy, partially as a side effect of its numerous reboots. Note the following are retcons and not reboots, so I don’t count, say, Byrne’s “Man of Steel” revamp or its elements (a completely different Superman, dropping Superboy, etc.).

For some reason, DC’s occasionally found the idea of Jor-El and/or Lara, Superman’s Kryptonian parents, surviving Krypton’s explosion as appealing. (And actually surviving, not as a hologram or such.)

One instance is in “Superboy” (vol. 1) #158 (July 1969). There, Superboy discovers that Jor-El and Lara didn’t blow up alongside the planet. Instead, they were in a suspended animation capsule drifting in space, unable to be roused due to absorbing lethal doses of kryptonite radiation.

A more recent instance is in DC’s post-New 52/Rebirth Superman storylines. Apparently, Jor-El survived Krypton’s explosion (due to Dr. Manhattan from “Watchmen”), and secretly operated behind the scenes on Earth doing various questionable actions as “Mr. Oz.” Jor-El also seems to be somewhat murderous and bigoted against Earth people here, unlike the classic Jor-El.

Why it’s bad: It goes against the spirit of Superman’s basic origin story? The New 52/Rebirth version of Jor-El is also horribly out-of-character and badly written, to boot.

Current retcon status: The Superboy story above was quickly ignored pre-Crisis; all subsequent versions of Krypton’s death showed Jor-El and Lara perishing with it.

The modern Jor-El revival, meanwhile, hung around for several years, before being killed off (via being sent back to Krypton a moment after he was abducted) in a 2019 Superman story. So Jor-El is still officially dead via the classic origin, but also still did a bunch of out-of-character stuff on Earth.

The flimsiness of Superman’s Clark Kent disguise has been joked about for years, with various attempts at explaining why his disguise works. One was a 1978 Superman story (“Superman” (vol. 1) #330). In it, we learn Superman’s glasses (thanks to their lenses made from the windows of his Kryptonian rocket), combined with Superman’s super-hypnosis power, subconsciously makes everyone think Clark looks weaker/different than Superman. Said effect supposedly lingered on in photographs and video recordings.

Why it’s bad: As others noted, this idea has a ton of flaws. The biggest flaw would be the numerous occasions when Bruce Wayne disguises himself as Clark or Superman.

Current retcon status: This story was very quickly ignored shortly after it was printed. Subsequent stories would show the usual classic secret identity protecting means (robots, shape-shifters, Batman in disguise, etc.). Finally, super-hypnosis was apparently dropped as an official superpower with Byrne’s 1986 reboot. Like super-ventriloquism, Superman using hypnosis probably hung around as long as it did as a remnant of 1930s/40s pulp adventurers and other media influences on superheroes (such as the Shadow).

Batman’s always been an urban legend

Back in the 1990s, DC hit on the idea of Batman being only known as an “urban legend”… not just during, say, his first year in operation (when it’d have been plausible), but for his entire career, even in the then-present.

Why it’s bad: The idea of Batman staying secret for his entire career generally goes against, well, a lot about his mythos: the Bat-Signal, his relationship with the police, decades of previous stories, etc. The two biggest factors are his membership in the Justice League (Earth’s highest profile superhero team) and the numerous other Batman-tied heroes that exist, such as Nightwing, Robin, and Batgirl. Nightwing’s usually a part of the also-high-profile Teen Titans.

This fairly dumb retcon also affected titles like “Young Justice” (the 90s comic, not the TV show), which had to show Robin staying out of sight when the team was in public.

Finally, there’s been numerous other non-Batman-tied non-powered adventurers in the DC Universe, more so since post-Crisis squeezed all their heroes into one Earth. Why would Gotham/the world at large believe, say, the Golden Age Mr. Terrific, Green Arrow, and similar non-powered adventurers were real, but not a guy dressed as a bat? (And post-Crisis, Gotham City was still the home of the Golden Age Green Lantern.) Also, who do they think stopped (or at least slowed down) the Joker’s repetitive gory murder sprees, the Man in the Moon?

Current retcon status: By the 2000s, DC seemed to have disposed of this retcon. In universe, “Batman Incorporated” shows Bruce openly setting up a network of Batmen worldwide. In real life, DC’s too reliant on Batman for this idea to make sense, as a third of their line’s tied to Batman or Gotham.

As a result of the “Crisis on Infinite Earths,” DC decided for some reason that Wonder Woman’s 1987 George Perez relaunch would also mark her in-universe debut, making her a then-new hero. Besides the continuity problems this raised with Donna Troy (and making Wonder Girl have a longer career than Wonder Woman), it also threw older JLA stories into question. DC’s solution? Substituting Black Canary for Wonder Woman in flashbacks to older stories and in origin retellings.

Why it’s bad: Diana and Dinah aren’t drop-in replacements for each other; they have different powers, backstories, etc. It also raises questions on how some older stories were resolved, given said differences.

Current retcon status: By the 2000s, DC decided Diana was once again a founding Justice League member. (I wonder if the popularity of the “Justice League” cartoon helped change their mind.) The 90s run even showed her mother (via time-travel) become the Golden Age Wonder Woman, also salvaging Golden Age Justice Society stories.

Several stories after “Crisis on Infinite Earths” decided to tackle a post-Crisis version of “The Flash of Two Worlds.” Presumably this was to justify why Barry didn’t meet Jay right after getting powers, since Central City and Keystone City were now twin cities versus on separate Earths.

DC’s answer? Golden Age Flash foes the Thinker, the Fiddler, and the Shade trapped Keystone in suspended animation limbo, while erasing everyone on Earth’s memory the city existed. 1990’s “Secret Origins” #50 had this story recounted by a young pre-superpowers Beast Boy, implying it was a short-term villain tactic. However, later Flash stories stated the villains had trapped Keystone for decades (since the 50s).

Why it’s bad: It raises more questions than it answers: what about relatives, etc. of people in Keystone? Or Keystone residents that left town for awhile and suddenly can’t recall where they lived (ignoring their luggage tags, driver’s license, etc.)? There’s also the long list of Keystone-tied phone numbers, university diplomas, employment credentials, newspapers in libraries, TV/radio stations serving the twin cities area, etc.? Regional power supplies, plumbing, airports, businesses named “Twin Cities (whatever)?” And if they’re Midwestern cities, two words: “urban sprawl.” They would’ve built over the “empty space” that Keystone occupied over such a timespan. (Suburban tract housing? Strip malls?) Overall, it all violates suspension of disbelief, and reasons why it’s one of my least favorite post-Crisis retcons. Ironically, it retcons a story that’s one of my all-time favorite Flash stories.

Current retcon status: This one seemed somewhat ignored as the 2000s rolled on? The New 52/Rebirth might’ve gotten rid of it entirely, if only because Jay Garrick and the Justice Society got rebooted/revamped (and put back on a new Earth-2). However, Central/Keystone still exist as twin cities on the main post-Rebirth Earth (“Prime Earth”).

There’s numerous other lousy DC retcons I dislike, but this post is already running long, so I’m stopping here.

What DC Comics retcons do you dislike or consider bad?