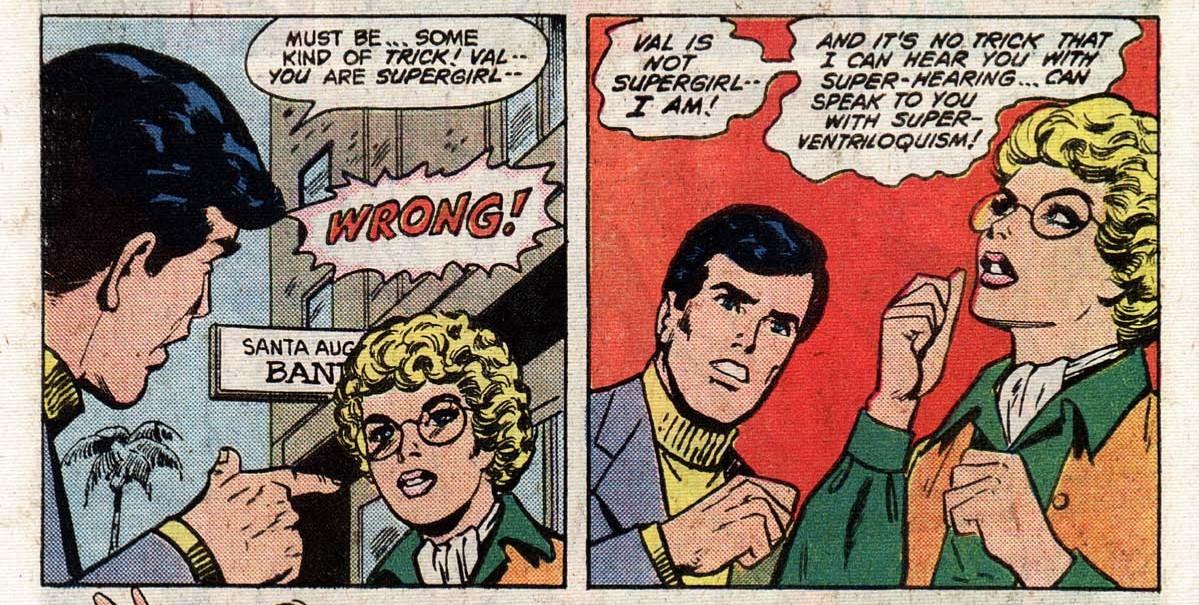 On the heels of my previous Superman-related posts comes this new one about one of Superman’s more unusual powers: super-ventriloquism. This power’s often the first one cited by Superman haters as “proof” of how Superman is “too powerful”; it’s even made various “worst Superman power” lists. Still, nobody seems to have written about what it is, or why Superman even has such a power.

Super-ventriloquism is the ability of Kryptonians (like Superman) to literally “throw” their voice across great distances to a specific location or individual. Combined with super-hearing, this allows Superman to communicate with others from far away without using communications equipment.

Superman’s vocal powers have also included the ability to mimic others’ voices (often cited as being, or tied to, super-ventriloquism). He’s also shown the ability to raise his voice to booming, megaphone/loudspeaker-like levels. (Superman uses his super-voice to order people off a collapsing bridge in “World’s Finest” #259, November 1979.) But it’s super-ventriloquism in particular I’ll focus on.

But why such a power? There’s the idea of “everything about Superman is super, so his vocal abilities are, too”; however, one reason for its origin might lie in the earliest influences on comics. During the 1930s and 40s, pulp adventurers like the Shadow and Doc Savage were quite popular. Such characters would sometimes be seen using (regular) ventriloquism to fool enemies as needed; Doc Savage in particular is described as a master of voice mimicry and ventriloquism.

Of course, Doc Savage was one of the direct influences on the creation of Superman; the Man of Steel shares various things in common with the Man of Bronze. Thus, vocal abilities including ventriloquism put Superman in plenty of company with other characters in the 1930s and 40s.

Ventriloquism was also a bigger part of popular entertainment in general in the 1930s and 40s. Edgar Bergen was a very popular ventriloquist, whose dummy, “Charlie McCarthy,” was as famous as Bergen himself. Slapstick cartoons of the time (Looney Tunes, etc.) would also make use of ventriloquism as a gag.

Ventriloquism started to wane in popular entertainment by the 60s and 70s, thanks to changing tastes. The pulp adventure characters, of course, had also waned in popularity by this point with the rise of superheroes. However, Superman’s vocal powers were at their peak usage during comics’ Silver and Bronze Ages.

From what I could find, the first instance of Superman using (regular) ventriloquism was in “Superman” #13 (November-December 1941); he uses such to fool some crooks holding Lois Lane hostage.

After this, the next instance is in “Action Comics” #60 in May 1943. Superman somehow manages to broadcast his voice along radio waves so it materializes in a police car’s radio, to summon them to a gang’s hideout. Future stories showed Clark pitching his voice to police cars, but dropping the radio waves explanation.

However, “Superman” #62 (January-February 1950) features Superman first using what would be considered super-ventriloquism (called “long distance ventriloquism” in this issue). He send his voice to an image of himself to make it “speak” to some gangsters. The Man of Steel also sends his voice to a police car to summon it to the gang’s hideout.

Ventriloquism appears in a few other stories during this period. One story is “Superman” #65 (August 1950), the first appearance of other Kryptonians in comics (in this case, an evil trio). “Action Comics” #147 (also from August 1950) shows Clark making his voice come from Lois’ phone.

However, his vocal powers’ usage started to grow more in line with its elaborate use in “Superman” #62. I couldn’t find the exact issue super-ventriloquism first gained that name. However, Clark specifically notes he’s using super-ventriloquism in “Action Comics” #276 (May 1961) to whisper a few orders to Supergirl.

The Silver and Bronze Age comics would show super-ventriloquism as one of Superman’s occasionally used minor powers, along the lines of his freeze breath. It also appears in Superboy stories too, of course.

Modern use of vocal powers

Super-ventriloquism ceased appearing in stories, along with a decreased emphasis on Superman’s already-infrequently-used other vocal powers, with the John Byrne reboot in 1986. Granted, Byrne’s reboot also did away with things such as his freeze breath, though that ability came back in 2000s stories. Super-ventriloquism, though unnamed as such, apparently made a brief appearance in the 2005 “The Question” series; Superman uses it to converse with Lois and the Question.

Superman’s vocal abilities do get some usage in media spinoffs, however. Clark uses mimicry abilities to imitate Batman’s voice in an episode of “The New Batman Adventures” (“Knight Time”); “precise muscle control” is how he explains this ability to Robin. The kid-oriented comic “DC Super Friends” has Superman deliver a “super-shout” to a crowd. Super-ventriloquism (named as such) appears in an episode of “Batman: The Brave and the Bold,” which Superman uses to imitate someone’s voice.

Pastiches of Superman also seem to have Superman’s vocal abilities, if not super-ventriloquism. Vocal powers seem to be an ability of the Crusader in Thom Zahler’s “Love and Capes” series. Abby delivers extremely loud yells at several points where she gets powers like her husband’s (long story). Mark and Abby do make frequent use of cell phones (like everyone else these days), of course…but see below for more on technology changes.

Here’s some of my guesses why super-ventriloquism was dropped, besides “being too cartoonish or goofy.”

Of course, real-life ventriloquism doesn’t work the way Superman’s version does; ventriloquism is just an illusion of projecting one’s voice to a nearby object or puppet.

I suspect this power’s somewhat-awkward name is one reason it was criticized. Maybe super-ventriloquism would’ve stuck around if it were named “psionic voice projection” or somesuch.

Too late to change it to a more “conventional” ability like telepathy?

Additionally, they could’ve given Superman some sort of low-level telepathic ability. That might’ve done the same job as super-ventriloquism’s main usage (communicating long distance). Superman’s cohort Wonder Woman made use of a “mental radio” (a telepathy-powered radio device, mostly to communicate with Paradise Island) in pre-Crisis stories.

Shooting this idea down: Superman’s power set was fairly set in stone by the Silver Age (and thus too late to add a major new power) by the time super-ventriloquism was named such. Also, 1955 saw the debut of the Martian Manhunter, a character who has Superman’s power set plus various telepathic/telekinetic powers.

Ventriloquism’s roots in the pulp fiction days also could’ve doomed it as a Golden Age vestige not worth keeping around in modern stories.

Finally, even if not for the Byrne revamp, real-life technology changes might’ve doomed super-ventriloquism anyway.

During the 1950s and 60s, the idea of communicating long distance without access to a phone booth or bulky radio/walkie-talkie was science-fiction at best. Thus, Superman being able to communicate with anyone at will was probably impressive.

However, in real life, telecommunications tech was already starting to evolve. Consumer cell phone service became widely introduced in the 1980s. In the 1990s, the Internet and pocket-sized cell phones exploded in popularity; since the turn of the century, both have become ubiquitous.

Nowadays, everyone has some sort of cell phone, even within the comics. In modern stories, Lois and Clark both carry cell phones, as does Jimmy, Perry, Ma and Pa Kent, Lex Luthor, etc. Even Krypto probably would have a cell phone too, if dogs could talk. They can even leave voice mail messages if the person called is unavailable, an ability super-ventriloquism doesn’t allow.

So overall, technology changes alone might be a big factor in rendering super-ventriloquism obsolete. Reaching anyone from anywhere on Earth is now something anyone can do, to the point where it’s now unremarkable.

That sums up my look at super-ventriloquism. While it’s a goofy ability, I thought it was a fun element in Silver/Bronze Age stories. Plus, super-ventriloquism’s much more useful than super-hypnosis (an enhanced ability to hypnotize others), but that’s probably another blog post.