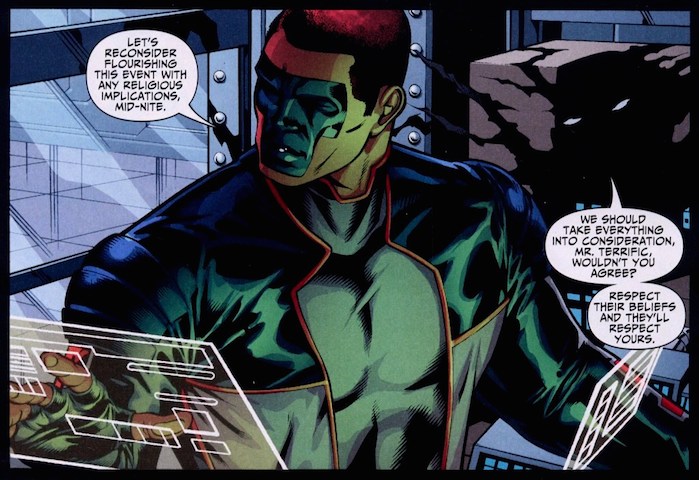 Today’s installment focuses on one of DC Comics’ newer characters, the hero (and Justice Society member/sometimes-leader) known as Mister Terrific (Michael Holt). Not to be confused with Mr. T, of course! Michael Holt was created by Tom Mandrake and John Ostrander. He first appeared in “Spectre” (volume 3) #54 in 1997.

The original Mister Terrific was Terry Sloane, a man without any superpowers—just a high intellect and Olympic-level athletic skills. Sloane decided to use his skills to fight crime (with the motto “Fair Play” on his chest) as “Mister Terrific.” Sloane joined the Justice Society in their original Golden Age run. He appeared in various stories over the ensuing years as a JSA member. Sloane was killed in 1979’s JLA-JSA team-up; the character was subsequently ignored for years.

A 1997 storyline in the “Spectre” comic revived the concept of Mister Terrific, by debuting his replacement, Michael Holt. After an accident claimed the life of his wife (and their unborn child), Michael Holt was contemplating suicide, until the Spectre intervened. The Spectre told Holt the story of Sloane’s career as Mister Terrific, and Sloane’s own death/its aftermath (with the JSA bringing his killer to justice). Holt decided not to kill himself, and instead took up the role of Mister Terrific. Holt subsequently used his skills to fight crime and eventually joined the modern versions of the JSA.

Mister Terrific’s served as the chairman of the Justice Society. He also frequently works with other DCU heroes, particularly Batman.

With the New 52 reboot, Michael received his own book. Unfortunately, it was quickly cancelled due to low sales. Since then, DC’s tried revamping Mr. Terrific by sending him to the new version of Earth-2, where the less said about what DC’s done with him, the better.

Making use of his great intellect, Holt possesses over a dozen doctorate degrees in engineering, physics, psychology, etc. He also became a multimillionaire by starting his own company (since sold to Bruce Wayne). Finally, Holt uses lots of comic-book-style ultra-high-tech items of his own design.

Holt’s Mister Terrific costume/mask contain advanced technology that render him invisible to all known forms of technological detection, and also offer a host of other abilities. Mister Terrific also makes use of “T-Spheres,” hovering spheres constantly following him that serve as weapons, hologram projectors, advanced computer databases, etc. On top of all of this, Holt is also an Olympic-level athlete and highly-trained martial artist.

Holt’s also an infrequently-seen example in American fiction of a Black character who’s an atheist. While some writers have occasionally tried to change this (Wikipedia says his pre-New 52 Earth-2 counterpart is a devout Christian), Holt’s atheism seems to have stuck. It’s nice to see a Black character shown as not even remotely interested in religion.