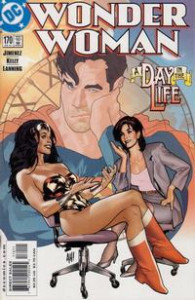 The latest idea to come along in the bad fan fiction-like feel of the “New 52” DC Comics reboot (now celebrating its one-year anniversary) is the announcement that Superman and Wonder Woman will be dating each other, starting in “Justice League” #12. See Newsarama’s article for details.

While I haven’t had problems with seeing the two date in alternate universe set stories (“Kingdom Come,” etc.), it’s not something I want to see the “real” versions do at all. (Of course, given the “New 52”-ized “emo Clark” and “Zeus is my daddy” Diana, I wouldn’t call either one the “real versions” anyway, but I digress…) Superman and Lois Lane’s relationship is quite iconic for a reason (the contrast of backgrounds, Lois a character who’s popular and strong enough to have carried her own comic at one point, etc.). Similarly, Wonder Woman’s classic interest was Steve Trevor (to the point the two even married on Earth-Two). In Wondy’s case, I never liked seeing Steve sidelined post-Crisis (more or less) and Diana go through a spate of short-lived romances (remember Trevor Barnes? Black guy with dreadlocks and possible future “minorities in cartoons” candidate?). While the “New 52″‘s finally brought Steve back (no idea if he still calls Diana his traditional nickname for her, “Angel”), he seems to be distanced from Wonder Woman the same way Lois has been. Steve will appear in a new “Justice League of America” title, while from the comics I’ve read, Lois is mostly just manning a desk at the “Daily Planet”/Galaxy Communications building or hanging out with Jimmy Olsen.

Of course, this will be a short-lived romance, being just a gimmick to get attention both among comics fandom and in mainstream press like “Good Morning America.” (Speaking of “GMA,” a character who’s supposed to be the world’s strongest woman’s a “sidekick“?) With the new “Man of Steel” movie on the horizon next year, I doubt even the myopic marketing sense of Time-Warner’s comics subsidiary can ignore that, or Lois’ role in the movie.

Then again, it might not matter what DC does anyway. Their only real role at this point, as far as Time-Warner’s concerned, is to maintain the trademarks on the characters and generate new story ideas/characters to turn into more “mainstream” venues (movies, TV shows, toys, etc.). Given DC’s leadership in recent years seems bent on living up to some of the worst stereotypes about comics readers (the shock-value violence, sexism, etc.), I can’t help but wonder what their long-term future will be like. Still, if what I’ve seen is any indication, I’ll be watching all this from the sidelines as a spectator, rather than as a customer.