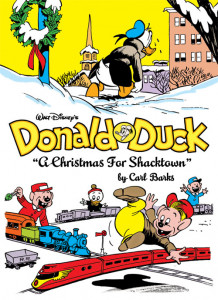 Here’s the trade paperbacks and comic strip compilations of interest coming out for November 2012. Information taken from the separate comics posts, as well as Amazon.com (for the comic strips).

Quite a few fun choices this month. The most popular of the two, I suspect, will be the Donald Duck volume and the Calvin and Hobbes collection. The Donald Duck volume includes the classic cover-featured story, “A Christmas for Shacktown,” where Donald and the boys try to collect money to give a poor Duckburg neighborhood a nice Christmas. Said story also features an early appearance of Uncle Scrooge, before he gained his own comic.

The Calvin and Hobbes collection has already been released, but as a hardcover edition. This set is in paperback form, and thus is $50 cheaper (according to the retail prices).

The Spider-Man volume collects the storylines where Spidey tries to prevent a disaster he saw in the future (it makes sense in context), plus a trip to a space station along with the Human Torch.