This week’s package show look is at a fairly late entry into the concept: “The New Batman/Superman Adventures.” 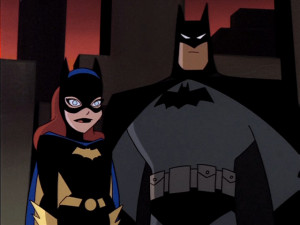 “The New Batman Adventures” (not to be confused with the late 70s series of a similar name) is the name given to the new Batman episodes made for this show. A followup to 1992’s wildly successful “Batman: The Animated Series,” this show featured an increased focus on Batman’s supporting cast. Said cast includes Batgirl, Nightwing (the adult Dick Grayson, the original Robin), and the newest Robin, Tim Drake.

This series saw new designs for the characters, more closely matching the designs in the “Superman” series. Some of the redesigns in my opinion were a vast improvement; one is the Penguin, who no longer looked like Danny DeVito’s “Batman Returns” version. However, others were a bit more controversial among fans, such as the Joker’s simplified look. Batman also saw the yellow oval dropped from his chest insignia, which the 90s comics also did.

One of my favorite Batman stories, “The Joker’s Millions,” got adapted for animation in this series.

Post-cancellation, the next Batman series was 1999’s “Batman Beyond.”

Debuting in 1996, this was the first Superman cartoon since a short-lived 1988 series.

The show saw some of its original elements introduced into the comics. One is the new supervillain Livewire, a woman with electrical powers. Her comic origin’s a vast improvement over the TV show’s version; there, she gets her powers when she’s nearly electrocuted from lightning passing through Superman. I’d like to think the Man of Steel isn’t an electrical hazard whenever there’s a thunderstorm!

Another contribution of this show to the comics was Lois’ nickname for Clark, “Smallville.” For awhile, the comics also switched to using the Golden Age tuxedo-wearing version of Mxyzptlk. Finally, Lex’s bodyguard and henchwoman, Mercy, eventually emigrated to the comics; there, Mercy also gained a fellow bodyguard partner named Hope.

My favorite episodes included the two Mr. Mxyzptlk episodes, with Mxy voiced by Gilbert Gottfried. Another memorable moment is when Lois is assigned by Perry White to cover an electronics convention. She refers to it as “the techno-geek show”…which would be a good name for a tech podcast.

Unlike many package shows, both halves of “The New Batman/Superman Adventures” crossed over in several episodes. One instance is “Knight Time,” where Superman imitates Batman when the Dark Knight goes missing. This includes a modern use of Superman’s infrequently-seen vocal powers; here, Clark uses them to imitate Bruce’s Batman voice. (Clark also jokingly mimics Robin’s voice, to Tim’s annoyance.)

The most memorable crossover is the three-part “World’s Finest” storyline (originally a direct-to-video movie), featuring the first meeting between Batman and Superman. Among other entertaining moments include Harley Quinn fighting Mercy, Joker referring to Lex as “Mr. Clean,” and Lois’ reactions later in the film to Bruce.

The entire run of these shows are available on DVD. “The New Batman Adventures” episodes were released to DVD as volume four of “Batman: The Animated Series,” complete with that show’s opening credits. Both shows are also available on digital video services, such as Amazon Video.

Here’s the opening title sequence for “The New Batman/Superman Adventures.”