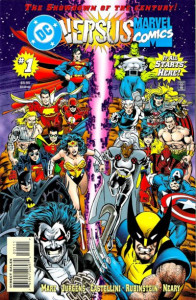 News has come that May 6, 2016 will see “Man of Steel 2” (or whatever it’s eventually called) will be facing off that very same weekend against… Marvel’s third “Captain America” film. Details on The Mary Sue. (Update 4/7/14: Now officially confirmed in this Marvel press release.)

I highly doubt that this release status will stay intact… if anything, Warner Bros. has already dragged their feet on releasing any superhero films (with “Man of Steel 2” their next one), versus the sizable number of Marvel films coming out between now and 2016. I doubt Warner Bros. wants to chance their next superhero film (and hoped-for keystone for a Justice League franchise) seeing a diminished box office due to a Disney/Marvel film. Of course, Disney doesn’t want their film to be hurt at the box office either, but there’s more at stake for Warner Bros. at this point.

So, I expect someone will be changing their release dates between now and May 2016… I’ll update this post when either side eventually “blinks.” On the unlikely chance neither does, I’ll be in line for “Captain America 3.” Barring anything that happens to Steve Rogers in the next few films, I assume Cap will maintain his usual optimistic tone, versus the cynical nature of everything about “Man of Steel” and (so far) its planned sequel.