While DC and Marvel won’t be participating, there are comics from most of the major secondary publishers, including: Image, Archie, IDW, Boom! Studios, Dark Horse, Valiant, Fantagraphics, and several manga publishers (Oni, Kodansha). A 30-day free trial is being offered, after which Comixology Unlimited will cost $5.99 a month.

I’ve signed up for the free trial; the default screen for Comixology Unlimited is below. 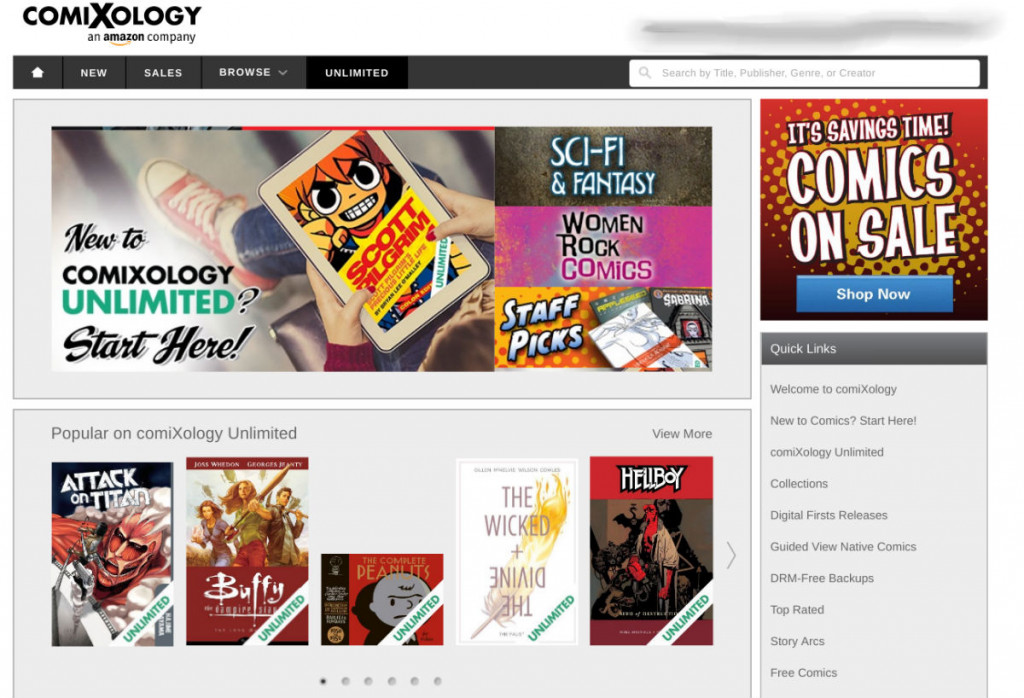 Comics offered as available for “Unlimited” are clearly labeled as such, similar to videos available under Amazon’s Prime Video service. (Amazon owns Comixology.) Browsing through the available books, it’s not quite at Marvel Unlimited’s level of selection. Some books only offer the first single issue or first trade paperback, while others have incomplete runs. For instance, Archie offers the 1990s “Sabrina the Teenage Witch” comics, but some of the issues are missing. Sabrina’s manga run isn’t offered, but the first few issues of her current “mature readers” horror title are. Elsewhere, “Lumberjanes” and “Scott Pilgrim” are offering just their first trade paperback/graphic novel volumes.

Still, Comixology Unlimited might offer more of a back issue selection with time, just as Marvel Unlimited has filled in back issues. However, an Entertainment Weekly article states that comics like Netflix will be “cycled” in and out. If that’s really the case, and Comixology Unlimited is just a limited “best of” offering, that might not make it as attractive a service. On the other hand, a “best of” service might encourage one to buy the remaining comics, given some of these are by independent creators. (There’s no indication how much in royalties creators get from Comixology Unlimited.)

This also leaves DC as the only publisher not to offer a subscription digital comics service. I’d like to see a “DC Unlimited”; it’d make reading back issues (or their digital-first titles) a lot easier.