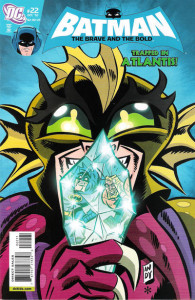 Batman: The Brave and the Bold #22

In the final issue before this title gets a pointless reboot next month (with a new #1 issue and the unwieldy new title “The All-New Batman: The Brave and the Bold”), the “cold opening” sees early Silver Age DC spelunker Cave Carson “team up” with Batman, albeit in an unintended manner. Then, the main story features Bats assisting Aquaman in unseating his half-brother Ocean Master from Atlantis’ throne, after Ocean Master conquered the kingdom through mysterious means.

Another entertaining issue, if slightly brief. Aquaman’s as boisterous as he is in the TV series, including coming up with amusing names for their adventure. As for Cave Carson, I don’t have much to go on, not having read any of his original Silver Age stories, but instead just his sporadic trademark-renewal appearances that DC uses him in on occasion.

The remainder of the issue is a reprint of the opening mini-story from “Tiny Titans/Little Archie” #1, which might explain part of why this issue’s main story felt a bit brief.

Billy Batson and the Magic of Shazam! #21

This is the final issue in this series, and I’m sorry to see it go, especially since there’s no Marvel Family series currently being published by DC otherwise (given the utter awfulness the Marvel Family’s been put through by DC in their mainstream titles). In this issue, the big showdown with and resolution of Black Adam is taken care of, plus there’s an appearance by… the Justice League.

While I enjoyed the issue otherwise, I think the appearance of the JLA brought it down somewhat. One of the problems of DC Comics’ treatment of Captain Marvel is that since “Crisis on Infinite Earths,” he’s forced to exist in the same limiting one-and-only universe as Superman (and the 12 billion other heroes also now forced to share just one Earth; the recent revival of the multiverse hasn’t changed this status for “New Earth”). This feels like it’s reduced Cap from his Golden Age and Bronze Age status as his world’s “mightiest mortal” (and its top hero) to just being the “Clippers” to Superman’s “Lakers,” i.e. a “redundant Superman knockoff” not as good as the “real deal,” and just another random character. I was hoping in this series (and assumed, until now) that Cap and his cohorts existed alone as heroes, without Superman (much as I like Supes) or the JLA showing up.

While this series treated the Marvels well, maybe being viewed by DC in general as just “Superman Family knockoffs” is one reason for the Marvel Family’s otherwise shabby treatment of late. The other reason, of course, being that their wholesome nature doesn’t fit in with their “grim and gritty” universe of late, thus their *villain*, Black Adam, getting more attention/better treatment by DC than the Marvels themselves (or Mary Marvel being subject to an out-of-character turn to evil, complete with a low-cut all-black costume).

This issue also has a reprint of “Tiny Titans/Little Archie” #1’s opening mini-story.