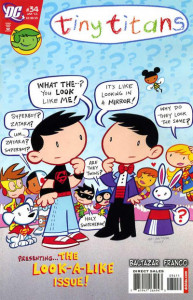 As usual, another fun (and cute) issue of “Titans” is out this month, this time featuring a story about how similar to each other Zatara and Superboy look. In the regular comics, Zatara was originally a Golden Age Mandrake the Magician imitator that could perform spells by speaking them backwards; he first appeared in “Action Comics” #1, the same issue Superman first appeared in. In the Silver Age, his more familiar daughter Zatanna appeared, who like her father also uses the backwards-speaking-spell shtick. Modern comics have also introduced a male teenaged cousin of Zatanna (who makes use of the name “Zatara” and has similar powers), who’s probably the basis for Zatara in “Tiny Titans.”

The issue features much use of the confusion between the two Titans’ similar appearances (and Raven using her magic to make things even more confusing-but-funnier). The best part: “Superboy” is taken by Supergirl to the Fortress of Solitude to be analyzed by the holographic-projection-of-Jor-El (with a few jokes related to when Beppo went there a few issues back).

Overall, I enjoyed seeing use of one of my favorite cartoon gags, the character assuming a paper-thin disguise that’s obviously fake to even a five-year-old, but fools even otherwise-seasoned characters who should know better. As Bugs Bunny himself put it in the pilot for “Tiny Toon Adventures,” “villains [and apparently heroes as well] always fall for cheesy disguises.” Of course, the Tiny Titans were also fooled recently into thinking Little Archie was Robin (and vice versa).

This comic also features an ad from Cartoon Network speaking out against bullying, per the recent national campaign against homophobic-fueled harassment of gay and lesbian youth (and bullying in general). Though it mimics the generic feel of Cartoon Network’s similar anti-bullying TV ads (using, ironically, the actors from their awful and out-of-place live-action reality shows), it’s nice to see the ad present in a comic aimed at children.