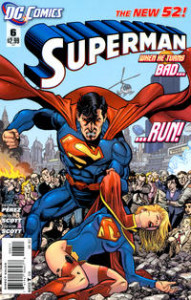 The “mysterious evil aliens” storyline concludes with a guest appearance by Supergirl, who’s also been rebooted for the “New 52.” (SPOILERS ahead) Supergirl appearing didn’t do much for me, given my lack of interest in the newly-revamped Supergirl and her surlier personality (though she gets points for sharing my dislike of the also-revamped Superboy… “awful clone” indeed!).

Supergirl aside, the issue sees Superman figure out who the heck the knockoff-Superman is, who turns out to be nanites-gone-rogue, assembled in Superman’s form. Needless to say, Superman takes care of the situation, and gets a moment in with Kara, who here only speaks “Kryptonian.” The Cousins of Steel’s home planet’s language is traditionally called “Kryptonese,” though guess that got changed too for the reboot…

One interesting moment: I’m guessing Superman uses his rarely-seen “super-yell” power here, assuming from the word balloons that he’s shouting loud enough for the helicopter pilots/people on the streets below to hear him. Speaking of balloons, actual thought balloons appear again!

Lois doesn’t get to do much besides converse with her father over the phone and direct things from her desk. Some online have criticized Lois’ new desk job leaving her out of the action in the Superman stories so far in this reboot. That might be something future Superman writers will want to look into addressing…

Speaking of future Superman writers, this marks Perez’s final issue on “Superman,” with Dan Jurgens and Keith Giffen coming on board. Thus, this also marks my last issue of “Superman,” reducing my DCNU purchases to just Morrison’s “Action Comics.” Despite criticism of Perez’s writing as supposedly being “too wordy,” I’ve mostly enjoyed his run, and sorry to see him leave. My future Superman reading (“Action” and the upcoming “Superman Family” revival) will fill the void, however.