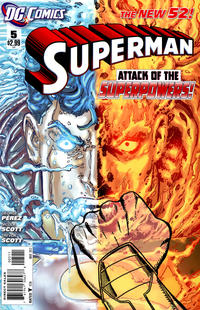 The “Superman vs the mysterious elementals that speak Kryptonese” storyline continues, with Superman seemingly making the entities vanish… or so the other characters think. We then see Superman go on a violent rampage (but, unusually for the “DCNU” given its shock-value violence levels, kept largely off-panel) through Metropolis, imposing strict “law and order” upon the citizens. Fortunately, the story ends with a revelation that all is not what it seems…

Of bigger interest is Lois in this story. Are they really letting her in on Clark’s secret this early in the reboot? Her dialogue/actions here seem to infer she’s caught on. That’d definitely be a big change from previous continuities, where it took years/decades for Lois to learn Clark’s secret (or in the Silver Age/Earth-1 Lois Lane’s case, never, save for stories set in a likely future of Earth-1 where the two finally marry).

Next issue wraps up Perez’s run on the Superman title…