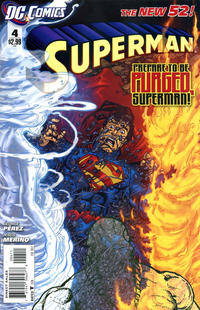 The fourth issue of Perez’s Superman run is weaker than the last few issues. While there’s a few interesting plot points, too much of it felt too focused on Clark’s odd/”emo” behavior. Said “emo” behavior starting to get old, by the way… isn’t Superman supposed to be fairly chipper? Then again, in the DCNU, nobody seems to be allowed to actually be happy, from what I can tell (or without a chip on their shoulder the size of the Rock of Gibraltar).

That out of the way, the most interesting aspects of this issue:

Next issue will hopefully put less emphasis on “emo Clark”…