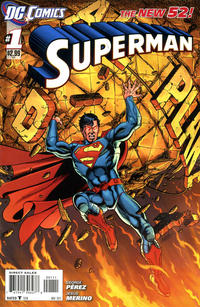 In the final week of the initial DC Comics reboot wave of books comes the new “first issue” of Superman. (For those curious, here’s what the *real* “Superman” #1, published in 1939, looks like.) Unlike “Action Comics,” Superman is written by George Perez, takes place in the present day, and sees Superman in his new “present-day” costume, a costume made of Kryptonian armor. Conveniently enough, the new costume resembles what the one in the upcoming Superman movie will look like.

Anyway, the story revolves around the “Daily Planet” receiving a brand-new building (with the old one torn down) and bought by/integrated into media conglomerate Galaxy Communications’ Galaxy Broadcasting System. Longtime fans (and probably Perez himself) will remember this happened once before to the “Daily Planet”; in the 70s and early 80s comics, Galaxy owned the “Planet,” with Clark Kent reassigned to being a news anchor on their Metropolis flagship TV station WGBS. Here, it looks like there’s a big emphasis on Galaxy and the “Planet”‘s Internet facilities, with the story making heavy mention of websites, Twitter, and smartphones. It’s nice to see the current troublesome stature of print newspapers covered here, even if I suspect some of the technology references (Twitter particularly) will seem dated in 10-20 years.

Two changes from the old Galaxy are seen here, however. For one, this Galaxy is apparently a tabloid news-like media conglomerate (Fox News jokes coming in the future?). Secondly, Morgan Edge (Galaxy’s CEO) is now African-American.

We’re introduced to Perry for the first time in this continuity as well. Perry shares the old versions’ gruff behavior, but here he looks a bit more in-shape (and slightly younger) than usual. Clark here seems shown as reasonably self-confident, though frustrated about the idea of Galaxy buying the “Planet.”

The story also covers an alien flame-being that threatens the city, which is summoned by some strange alien creature-thing. I don’t have more to go into than that, because (as the editor’s boxes indicate) it’s a tie-in to a storyline in “Stormwatch” #1, which I’m not too interested in reading (even for Apollo and Midnighter).

And yes, Superman’s fully in action in this issue, demonstrating here his usual confidence and full range of superpowers. Yes, freeze breath has made it into the “DCNU.” Some of Supes’ dialogue toward crooks felt like a flashback of his Bronze Age self (his line about “drag racing”), though no uttering of “Great Krypton!” is seen. Hopefully he’ll lose the battle armor look and regain his old costume sometime soon (or at least after the movie has come and gone).

Lois and Clark’s scene toward the end of the story seems meant to show how they’ve rebooted their relationship back to the old status quo (Lois doesn’t know Clark’s Superman, and is dating someone else entirely). There’s been a lot of remarks online about removing their characters’ marriages with this reboot (along with Barry’s marriage in “Flash”), and I can’t blame others for wondering why DC (and Marvel) view marriage these days as a “liability.” Still, this seems pretty tame compared to what we got from DC *last* week for Starfire and Catwoman…

One other complaint by some about this issue is that it’s supposedly “too wordy.” While it did seem wordy in retrospect, I’d prefer that to something splash-page-heavy and didn’t take long to read (like “Justice League“).

Overall, I enjoyed this issue, and will be back for issue #2. Unfortunately, it was announced today that George Perez will be leaving this title after issue #7, to be replaced by Keith Giffen (of “Justice League International” fame) and Dan Jurgens (of 90s Superman comics fame). Besides wondering if someone entirely new to DC might’ve been a better choice, I wonder why Perez is leaving the title. I was hoping the writer/artist who made Wonder Woman’s 80s reboot a success could’ve stayed on board to do the same for Superman.