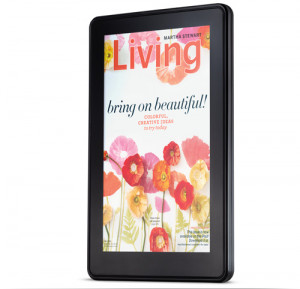 I’m quite sure the Kindle line will see plenty of sales this holiday season. Indeed, the Fire’s hardware is based on the Blackberry Playbook, done by Amazon as a way to get it out by Christmas (versus coming up with a totally new model from scratch). Since it’s using Amazon’s services, the Amazon Music store and cloud-storage services will be available.

The biggest ereader competitor to the Fire, of course, will be the Nook Color, Barnes and Noble’s color LCD ereader. (iPad owners won’t want to jump ship to the Fire, especially since there’s a Kindle app available.) The Fire is $50 cheaper than the Nook Color (as of this writing), but I imagine B&N will drop the price soon. There’s also rumors about a Nook Color 2 coming out at some point, which given the Fire had better be sooner rather than later. Like the Nook Color, the Fire is also based on Android, albeit heavily customized, and only uses Amazon’s app store rather than Android Market. I wonder if, like the Nook, the Fire will be easily rootable, allowing it to have access to the full Market.

As for the old Kindles, they’re now on sale at a discount, with the keyboard Kindle now renamed “the Kindle Keyboard.”

I own the Nook Color, and enjoy using it to read ebooks and comic books. Given there’s no sign if Amazon will do away with one of the Kindle’s main faults (using a proprietary Kindle format for ebooks instead of epub like literally every other digital ebook venue), I’m not the audience for the Fire. Yes, there’s conversion software to convert between epub and Kindle’s format (such as Calibre), but I don’t see why I should have to do that just to use a Kindle. Of course, since price and convenience trumps future-proofing/compatibility for the general public, I imagine this won’t be a hindrance saleswise for the Kindle.

I’ll have more to say once the new Kindles go on sale in physical stores, where I can look at them in person.