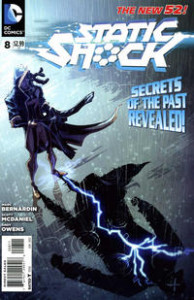 The final issue of Static’s “New 52” series sees a summary of Virgil’s life to date, as he’s forced to see his school’s counselor.

Not much else to describe about this issue, as it’s mostly a series of flashbacks over Virgil’s past, including his Dakota years. Apparently, Static’s Milestone-era books are still canonical, aside from presumably “Worlds Collide” and any of Virgil’s references to being a big DC Comics fanboy. The latter’s one trait about Virgil I’m sorry to see ditched, in the “merge all 8 zillion superheroes into one overcrowded Earth” post-Crisis mentality that DC forced onto the Milestone characters a few years ago. Though that said, DC *does* exist within the DC Universe as a company, albeit one that publishes “true crime” comics about Superman, Batman, and so forth.

Anyway, despite the series’ problems (including the major ones outlined pretty well here and here), it was one of the few “New 52” titles I found somewhat enjoyable, or at least more enjoyable than how “Mister Terrific” turned out. I still think they should’ve given this series more of a chance (they’ve already changed writers a few issues ago), or at least promoted it more. Static was quite popular on Saturday morning TV in the 2000s, plus he was one of the few African-American headliners in the “New 52.” Since I’m not interested in following Static in the DCNU version of the “Teen Titans” (if he winds up there), I’ll go back to enjoying Static in TV reruns (if available, since the show’s still not on DVD, save a single one-disc release years ago).