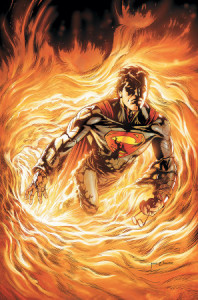 Here’s what’s of interest for DC Comics for July 2012. Full solicitations may be found here.

The “Before Watchmen” titles continue to come out this month, to much debate among online fans.

“Action Comics” sees (from the description) Lois in action, investigating “Earth’s first Superman,” whoever the heck that is. There’s a classic “The First Batman” story from the 50s, but the only “first Superman” stories I recall usually involved some Kryptonian temporarily winding up on Earth before heading home, also from the same time-era as “The First Batman” (or various Superboy stories). Still, at least Lois will be getting to see actual action versus being stuck behind a desk. We’re also getting an origin story for… that ugly Lil’ Abner costume’s S-logo T-shirts?!

“Earth 2” focuses on Alan Scott (with an “all-new origin”), Jay Garrick, and a new Hawkgirl.

DC’s announced a new line of comics under the name of “National Comics,” with more updated versions of old characters. This month sees Kid Eternity the focus. The original was a deceased kid who was sent back to Earth from Heaven with the ability to help others by summoning various deceased historical figures; a 70s or 80s retcon revealed him to be related to Freddy “Captain Marvel Jr.” Freeman somehow. This version, per the description, is “an introverted medical examiner” who has 24 hours to solve a deadly crime. Um, OK…

This month’s “Showcase Presents” volume: “Tales of the Unexpected,” another old sci-fi title.

Over in Johnny DC, “Superman Family Adventures” sees the Super Pets show up, while “Green Lantern” sees the appearance of the Tattooed Man. Wonder Woman’s also getting a one-shot title compiling her various “Adventures in the DC Universe” stories. For those who don’t recall, this was a series of comics put out in the mid-90s that were drawn in the art styles of the Batman and Superman animated series of the time. However, since the non-Batman and -Superman characters were merely their regular DCU selves imported wholesale (the “Justice League” cartoon hadn’t debuted yet), the stories were a mixed batch at best, depending on the retcon-du-jour of the time. For instance, the Marvel Family issue was forced to use the “they share the powers, but diminished when doing so” retcon of the time from “Power of Shazam.” That, and the oddity of the Animated Series Superman hanging out with, say, the Kon-El Superboy or the hook-for-a-hand Aquaman (pre-“Justice League,” anyway). Still, I haven’t read the Wonder Woman stories, so this might be worth buying, plus it’ll be the only Wonder Woman comic coming out that’s free of the idiotic “New 52” retcons being subjected to Diana.