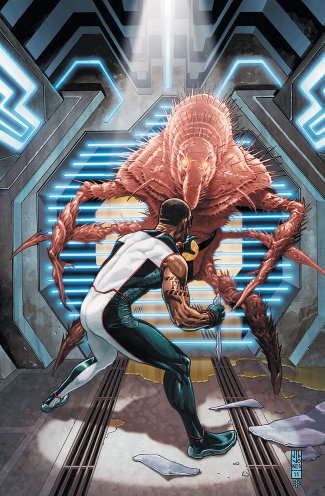 And so we come to the fourth issue of Mister Terrific’s title. This month’s story continues the alien encounter started in last month’s issue, with Michael abducted by malevolent alien conquerors in the ninth dimension. Yep, you heard me, ninth dimension… take that, Buckaroo Bonzai! (And also the merely-fifth-dimensional Mr. Mxyzptlk, I suppose, though he’s yet to be re-introduced in the “New 52” reboot.)

The rest of the issue focuses on Michael being experimented on by his captors (to get an idea of what Earth and its people are like), plus Michael meeting his fellow prisoners and attempting to escape. While the other aliens (and Michael’s escape attempt) are interesting, unfortunately, the dialogue is the issue’s weakest point, and not because it’s largely self-narrative (since the aliens don’t speak English for most of the issue).

Not sure why ninth-dimensional aliens would care about the skin pigmentation of a specific group of natives of a third-dimensional planet, given in most sci-fi, aliens usually view humans as one homogeneous group without distinctions. “They all look the same,” as one of the Ferengi on “Star Trek: Deep Space Nine” felt about humans. The line might’ve worked better if Michael was anything like Samuel L. Jackson, Chris Rock, or Will Smith, but he’s not. Thus, that line (and the “space bitch” one) feel very out of character.

Also head-scratching is the imagery conjured up when the aliens experiment on Michael; I’m not sure if it’s the result of his being in pain, an attempt to throw off the aliens (by making us look scarier than we actually are), or something else. Power Girl fans should note that Karen only appears in this issue during this scene, as a monstrous hallucination of Michael’s.

The storyline apparently concludes in next month’s issue. While I’ve had high hopes for this title, and glad to see a comic starring a super-intelligent, successful African-American atheist superhero, the characters’ dialogue for this book (and the writing in general) is too uneven. I’ll probably buy the next issue to wrap up the story, but I’m considering dropping the title after that.