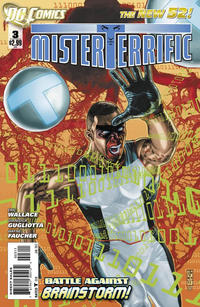 This issue sees the resolution of Mister Terrific’s fight against Brainstorm, who’s trying to drain the entire brain power of Los Angeles. (You’d think a villain with that shtick would pick a city without Hollywood…). Anyway, the attack starts to work, until Mister Terrific uses his floating “T-Spheres” to stop Brainstorm. However, during the fight, Brainstorm’s absorbed some of Michael’s memory.

The villain thus learns Michael’s identity, and reveals the true cause of Michael’s wife’s death. This results in… Michael brutally (and uncharacteristically) beating Brainstorm in front of witnesses (a group of kids), who grow disillusioned by their former-favorite hero. Later, while feeling regret about this (and having erased Brainstorm’s memory of his secret identity), Michael’s visited by aliens inferred to in last month’s issue, seeking his help. Aside from all of this, Michael’s company is in danger of a coup.

Can’t say I liked the latter half of this story. Did we really need to see Michael given even more angst about his wife like that, and displayed in such a manner? It also doesn’t give a flattering portrayal of a somewhat-obscure-to-the-general-public character for new readers.

There’s also a few other flaws. Karen Starr and the rest of the (small) supporting cast introduced is unseen (save for one page) in this issue. Finally, the issue’s cover sloppily lists on the cover artist credits for the wrong people. Don’t you have editors/proofreaders, DC?

From brief browsing around of other reviews online, others seem unhappy about the direction of this series overall. (That, or they wished DC had kept around a series about the less-interesting-to-me Power Girl, though I assume she’ll be back with the JSA’s revival.) While I was pleased that DC made a series about a super-intelligent African-American superhero, I’m wondering if the writer’s approach here is in the wrong direction. Or perhaps Mister Terrific’s being hampered by DC’s generally negative house style these days? I wonder how Marvel might’ve handled such a series (though don’t recall Mister Fantastic getting his own stand-alone series). Still, I fear this series might be one of the first “DCNU” titles canceled. Hopefully the next issue steers away from this direction…