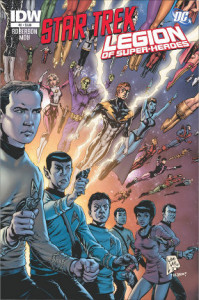 The second issue of this crossover sees more of the teams struggle to fight against the oppressive military of this alternate Earth, while trying to figure out its nature. Spock discovers that this world’s history veered off sometime in the ancient past, with humanity’s technology prematurely advanced but with a militaristic, conquering bent. Meanwhile, the authorities have confiscated the remains of the Legionnaires’ time bubble, while the Legionnaires themselves track the source of a “temporal disturbance”… leading them to finally meet the Enterprise crew, on which the issue ends on a cliffhanger.

This was an OK story, though feels a bit short for a $4 cover price. We’re given more glimpses of the main villain who seems to be the ruler of the empire. From the glimpses shown and the time-mucking nature, I assume it’s Vandal Savage, the immortal caveman and Golden Age enemy of the Justice Society. Assuming the Legion shown here really is the pre-Crisis, “classic” versions (multiverse and all), Vandal Savage was usually an Earth-Two character, though in the 80s he had moved over to Earth-One (to plague Superman, among others). Tampering with the past of an Earth he’s not from would be right up Savage’s alley (and avoid temporal related “wacky hijinks” from occurring). The Legion, of course, was from the future of Earth-One.

Several of both world’s elements are seen here, with the Klingons mentioned, along with the Khund from DC Comics. Oddly, the Borg are also mentioned here, which throws off the Original Series feel of the Trek side of things.

I assume the next issue will do the classic “first they meet, then fight, then realize they’re on the same side” superhero comic bit. Hopefully, given how short this issue’s story felt, there’ll be more to the story than just that… 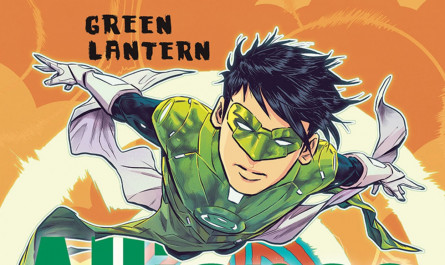