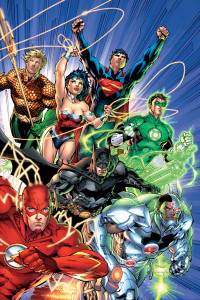 This is the opening title for the much-hyped reboot of the DC Comics universe (DCU), designed to get new readers to come on board and try out DC’s comics. Unfortunately, what I’ve seen here doesn’t look like it might be enough to keep them coming back next month.

The plot (yes, SPOILERS): Batman is pursuing some sort of creature with giant razor-sharp teeth, while also running from the Gotham City police (who’re after him for what seems to be anti-superhero/anti-vigilante reasons). Batman soon encounters Green Lantern (Hal Jordan), and the two team up to follow the creature’s tracks, while exchanging sarcastic remarks. Meanwhile, Vic “future Cyborg” Stone gets a contract for college football, while (after tracking what clues they have to Metropolis), Hal and Bruce encounter for the “very first time” the new and improved (and red-brief-less) Superman. “Next: Superman vs. Batman” (as the closing caption promises).

After I was done, I was left wondering if there were a few pages missing, given how slight a read it felt for the increased cover price ($3.99 for 29 pages per Comixology’s count, versus the regular $2.99 for 22 pages of a normal-length comic, excluding ads). Apparently not; the only extras in this issue are a few sample artwork pieces I doubt new readers (or *this* reader, anyway) will care about.

As for the story itself, there’s a few amusing moments between Hal and Bruce, but still felt rather lacking and decompressed. For a new reader paying $4 for this, I’m not sure if “Hal and Bruce meet, exchange a few lines, then run into a monster/meet Superman” will cut it. There’s also that this is supposed to be a *Justice League* story—but half the team is unseen here. (No Wonder Woman, Aquaman, etc.). And what team that *does* show up seem to be at odds with each other, leading to the story’s ending… another Superman vs. Batman fight?! Seriously?

Of course, the *original* origin of the JLA (shown in “Justice League of America” #9 in 1962) was told in just one issue, *and* managed to include the entire initial JLA roster (Superman, Batman, Wonder Woman, Green Lantern, the Flash, Aquaman, and the Martian Manhunter). Yes, I’m sure it lacked the use of mild swear words by Bats, but still got the job done. Doesn’t look like it’ll be the case here… thus, I hope the new readers have strong enough attention spans for however many issues this flashback will take.

Not related to the story, but the digital version of this issue had its own, well, issues: DC waited until 2 PM (EST) to release it for sale via Comixology, so as not to offend brick-and-mortar comic shops. Too bad that the issue was available on the usual piracy sites well before then… especially since DC thinks charging $4 for a slightly-longer-than-normal story in digital format will bring in readers. Note to DC: you’re competing digitally with both “free” (piracy) *and* the various other digital stuff $4 can go towards—“Angry Birds,” several iTunes songs or a movie/TV show rental, half of a monthly streaming subscription to Netflix, *two* issues of an also-same-day-digital Archie comic, your corporate cousins’ airings of Superman and Batman cartoons/movies, etc. Compared to all that, $4 for a 20-minute read might not be worth it for newer readers.

The art work, as expected, was up to Jim Lee’s usual standards. Though one question: this story takes place in the “early days” of the new DCU. Thus, I thought Superman’s “early days” costume was that stupid-looking “overgrown 5-year-old’s Superman costume,” not his “red-briefs-less new upcoming movie costume” for the present-day-set stories? Unless he switched to a “real” costume quite early on in his career.

I guess I’ll be back for issue #2, if only to see if the rest of the JLA actually shows up…