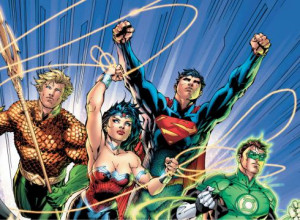 While I’ve mostly ignored everything from the mainstream DC Universe for some years now (aside from following stories such as “Superman renounces his US citizenship” in Action #900 or reading about horrific schlock such as “Identity Crisis”), this one is too big to ignore: DC plans on rebooting its entire superhero line of books on August 31, following the conclusion of their current mega-crossover, “Flashpoint” (a storyline involving some Flash villain somehow altering the past to create a different modern-day DCU).

The reboot will start with a new “Justice League” (no “of America”) #1, followed by 50+ other #1s (all their titles seeing a reboot). Also announced: DC will also start selling same-day digital titles on the same date as the reboot. All of this is supposedly being done to try to lure in newer readers. More details about this whole thing will come out tomorrow, but for now, here’s this article:

A lot to absorb, there… I’ll give my initial thoughts in bullet-point-form below:

There’s supposed to be more news to come… and I’ll be here to remark on it!

Update (5/31/11): Here’s some more info on what’s coming out from this reboot, including a Grant Morrison Superman title (if it’s anything like “All Star Superman,” it might be worth looking at): http://www.comicbookresources.com/?page=article&id=32566

However, the Green Lantern blurb noting it follows-up the events of “Blackest Night” suggests “fail” from the start. Making the same mistake they made after “Crisis on Infinite Earths” in referring back to previous issues these supposed new readers they want to attract won’t have read or won’t care about? Not to mention setting up continuity problems from the get-go by not giving *all* the books a complete restart…