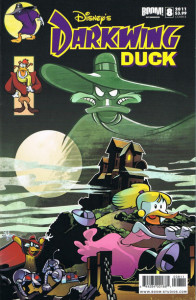 The “Crisis On Infinite Darkwings” story arc finally comes to a close, as Darkwing, Gosalyn, and Morgana, along with the *many* alternate versions of Darkwing, all team up to face Negaduck and a second villain, Paddywhack (who I assume is another villain from the original TV series, though I’m unfamiliar with him). As expected, everyone (including Magica de Spell, for awhile anyway) contributes to defeating the villains, and manage to send the alternate-Darkwings home. Though one plot thread from this storyline is left lingering at the end of the story (to be continued next issue).

Nice to see Darkwing figure out how to defeat the threat, drawing from a previous (TV) adventure to do so. However, the best part of this issue, of course, was seeing the different versions of Darkwing that showed up. Versions that I caught (among *many* others):