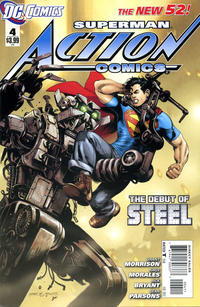 Superman fights both the guy-not-yet-named-Metallo and the invading alien robots (the “Terminauts,” presumably under the control of Brainiac). Despite the Man of Steel’s best efforts (and seeing his Lil’ Abner costume torn to shreds; maybe this leads him to get his real costume?), he fails to prevent the invaders from stealing most of downtown Metropolis and sealing it in a bottle.

Lex Luthor shows up here briefly (mostly to chew out his not-so-secret contact over their “arrangement”), while John Henry Irons, seeing the chaos, swings into action as… Steel! In the backup story for this issue, we see Steel fight Metallo, while learning (via his self-narration) why he’s interested in science and fighting for good. In this version, it seems his parents are an even bigger influence on motivating John Henry to become a hero than before (versus his original origin in the 90s comics, where he becomes a hero during the aftermath of the whole “Death of Superman” brouhaha), though Superman’s still an inspiration. I liked how Metallo was defeated…a cheap $10 USB flash drive?! Thought the tech-specs name-dropping by Metallo (and later by Steel) was amusing… never mind in 25-30 years (the probable time of the next Superman origin-reboot), it’ll probably sound as dated as crowing about one’s Commodore 64 does today.

Glad to see Sholly Fisch is writing the Steel backup; I liked his stories in the various Johnny DC books. I’m scratching my head, however, at seeing the main story won’t be picked up again until “Action” #7, three months from now… that doesn’t sound very new reader friendly to me (assuming we’re still trying to accommodate new readers at this point in the reboot).