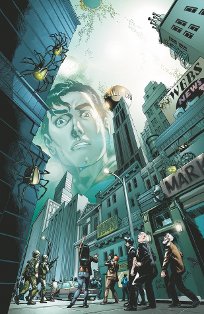 Here’s what’s of interest from DC Comics for March 2012.

It looks like there’s a lot of writers being shuffled around this month, with the first six issues of the rebooted-DCU under DC’s belts by this point. Guess that’s one trait being held over from the old-DCU. I wonder what any new readers (still reading by this point) will make of this facet of modern-day superhero comicdom. Superman and Static Shock both get new writers this month; while I’m still sticking with Static, Superman’s been demoted to “might buy” status.

What’s with Catwoman’s eyes in that cover? Being attacked by Static’s second cousin aside, did Selina just have her eyes dilated by the optician or something?

This month’s “Action” picks up where issue #4 left off, with Superman trying to rescue Metropolis (plus a Steel backup story).

This month’s Showcase is a first volume of “All Star Squadron,” Roy Thomas’ early 80s title about the lesser Golden Age/Earth-Two (not “Earth II,” as the solicit spells it) heroes during the early days of the US’ involvement in World War II. There’s also a trade paperback of Fortress of Solitude stories, but I’m not sure if it’s worth the purchase, since I already own several of the stories reprinted.

On the Johnny DC side of things, there’s sad news to report: March is the last issue of “Tiny Titans.” While I’ll miss this title, there’s some good news: Art Balthazar and Franco Aureliani will be working on a new title debuting in May, “Superman Family Adventures.”