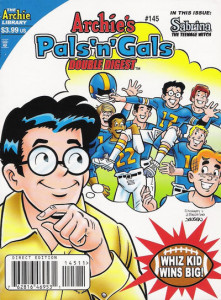 This month’s “Pals ‘n’ Gals” seems to feature Reggie in a great deal of stories, despite the use of Dilton on the cover (and Sabrina advertised on the cover as the main backup stories). After the cover story about Dilton trying out for football (but still making it onto the team in a way) comes a spate of stories centering around or heavily involving Reggie. In one, he tricks Betty and Veronica into thinking they way too much or too little, using a trick scale. Another story has Reggie mad at the Archies for letting Jughead’s baby sister, Jellybean, attend a band rehearsal. There’s also several making use of the “Reggie hits on Midge and incurs Moose’s wrath” plot.

In other stories, there’s a reprint of what appears to be a 50s- or 60s-era Archie story about his parents (Archie himself doesn’t appear in the story at all). Archie’s father tries to find a new hobby to relax, with disastrous results. Interesting to see the parents are able to support their own story, without relying on their famous offspring once. This is followed by a few stories from the short-lived “Archie 3000” comic that could’ve been set, with a few changes, in the here-and-now, as they revolve around inventions of “future”-Dilton malfunctioning.

After this is a reprint of a story starring Chuck Clayton. From the art style (Chuck sports a bit of an Afro) and no mention of his artistic skills (the story focuses on Chuck, Archie and Jughead trying to deal with a sleazy rival at a track meet), the story probably dates from the 70s or early 80s. Nancy, Chuck’s girlfriend, puts in a brief appearance as well.

As promised on the cover, there’s a few Sabrina stories as well (one of the main reasons I bought the issue). One story covers the drawbacks in using magic in her daily life, while another shows Sabrina (and Aunt Hilda) trying to sell door-to-door items to an obnoxious neighbor. A third story is Halloween-focused, with Sabrina trying to throw a Halloween party at the same time she’s supposed to be visiting relatives with her aunts in the Magic Realm (or “Other Realm,” as the story was originally published during the 90s sitcom’s run). Nice to hear that Archie plans on giving Sabrina her own comic again at some future point.

A Josie and the Pussycats story is also in this issue, though a more dramatic-toned one than usual; the ending was on the depressing side. I didn’t think they’d center such a tale around Melody, the ditzy member of the group…

Finally, there’s a rather blatantly dated 90s story where Betty and Veronica, seeing Archie gawking at a poster of the “Sugar Girls” (read: Spice Girls), decide to get “Sugar Girls” makeovers to show them up and impress Archie. Wonder if this is one of the stories in the “Best of the Nineties” trade paperback Archie’s put out. 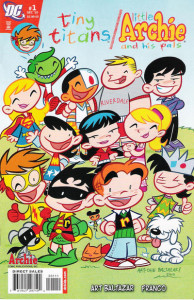 Written by: Art Baltazar and Franco

And so begins the first of the three-issue inter-company crossover miniseries between the Tiny Titans characters and the Archie characters (in their “Little Archie” personas, though unlike those stories, Archie’s not called “Little Archie” by the others here).

The issue is written much like any issue of “Tiny Titans,” where random but cute events happen in the Titans’ lives. In this case, we see Riverdale’s the town next door, which results in such amusing mini-episodes as Little Archie’s mother and Alfred mixing up Little Archie and Robin’s respective clothes at the dry cleaners, resulting in their friends (in typical cartoon fashion regarding people in cheesy disguises) left wondering why “Robin” has orange hair. (An amusing gag about Archie’s checkerboard hair pattern is used here, though Archie itself also used it once for a digest cover). There’s also a backup story about Mr. Weatherbee.

However, the funniest part was the second story, where the Titans attend class at Riverdale Elementary. Robin’s convinced Ms. Grundy’s related to Solomon Grundy (the swamp-spawned zombie villain of DC Comic fame). The last three panels were worth the cost of the comic alone…

I look forward to the other two issues of the series (Sabrina and Hot Dog are supposed to show up at some point)!