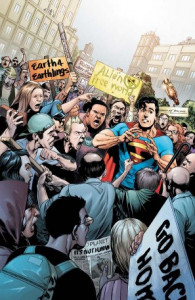 Once again, here’s what’s of interest to me from DC for November 2011:

Thanks to this reboot, this is probably the most I’ll have bought from DC in a long time. However, I hope by this point I’ll still be interested in the rebooted-books listed above, or that they won’t already be in danger of being given the axe (I’m looking at you, DC, re: “Mister Terrific”/”Static Shock”).

As I suspected, most of the solicitations still look caught up in the current ultra-violence style of DC (see: the Aquaman cover; “not for the squeamish” indeed), which might explain why none of the mainstream books are rated anything lower than “T” (even the supposedly-“darker” Justice League book, “Justice League Dark,” has the same “T” rating as the regular Justice League title!). Wondering how many of the “new readers” will still be on board by this point, or if they’ll have bailed after realizing that $3-$4 for a 15-minute read could’ve gone toward the cost of an iOS/Android app or half of the cost of a month of Netflix streaming. Still, at least there’s no ludicrous 52-part crossovers listed (for *now*…).

To break down/delve into some of my choices above…

In other observations, . (EDIT: That Newsarama link stuck some ad/Facebook box in the middle of the solicitations, which I didn’t scroll down past and see the remainder of the books…meh.) this month’s Showcase volume is volume 4 of “Wonder Woman,” covering her stories from the mid-to-late 60s. There’s also a series of “DC Comics Presents” reprints of individual shorter stories, including the now-famous “Elseworlds 80 Page Giant” that was originally almost all pulped years ago (after a DC editor thought Superbaby stuck in a microwave was a “bad example,” despite that he’s, well, a *super-baby*) but got released in England.

The description for “Detective” made me roll my eyes (a serial killer making his victims into *dolls*? Sounds completely different in tone/style from the pre-rebooted Bat-books to me…). And finally, no “Looney Tunes” comic? Did DC finally cancel this long-running title, despite “The Looney Tunes Show” still being heavily promoted (and a ratings success for Cartoon Network)?